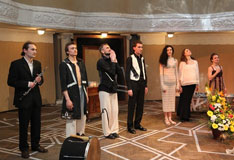 President of the Federation of Employers of Ukraine, the Chairman of the Group DF Supervisory Council Mr. Dmitry Firtash congratulated Lviv Les Kurbas Academic Theatre, one of the most famous theaters in Ukraine, with the 25th anniversary. On Saturday, the jubilee show "Thus Spoke Zarathustra" will be premiered in the theater.

In his message to the theater Mr. Firtash noted that the 25th anniversary ofKurbas Theater was a significant event not only for the theater community, but also for the whole Ukraine. “Les Kurbas Theatre is a unique phenomenon in Ukrainian culture. Performances’ originality and dedication of directors and actors have turned known classics into modern theater masterpieces”, - said Mr. Firtash in his congratulatory message.

In 2012, Mr. Dmitry Firtash donated to the theater assistance in the amount of 500 thousand UAH, which was channeled to the reconstruction of the theatre accommodations and purchasing of new lighting and sound equipment for the auditorium.

Les Kurbas Theatre was founded in 1988 by the director VolodymyrKuchynsky and troupe of young actors and artists. Over 25 years the theatre has become one of the most well-known groups in Ukraine and abroad. The troupe successfully toured in many cities of Ukraine, Russia, the USA, UK, Poland, Egypt, Albania and Macedonia. Due to the successful work, the theater was awarded the Taras Shevchenko National Prize, became the first recipient of VasylStus Prize and won the Grand Prix at 14 international festivals.

Lviv Academic Les Kurbas Theatre reached the greatest success with performances “In Praise of Eros” based on Plato's dialogues, “Mark Cursed or Oriental legend" based on VasylStus’s poetry, "Dreams" and "Games for Faust" based on Fyodor Dostoevsky’s works, "Apocrypha" and "Forest Song" based on LesyaUkrainka’s dramatic poems. Also the Kurbas Theatre had a great success with "Grateful Erody" based on the works of GrygorySkovoroda, "Between the two forces" by VolodymyrVynnychenko and "Waiting for Godot" by Samuel Becket.