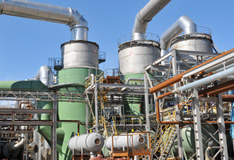 During his working trip to ‘Krymskiy TITAN’ last October, Dmitry Firtash, Head of the Board of Directors of Group DF announced his plan to achieve doubling of this plant’s output over the coming three years. Today, the businessman presented a new sulfuric acid production facility which will enable an titanium dioxide production increased to 120 thousand tons and building yet another plant with the identical production capacity. Attending this presentation was the Prime-Minister of Crimea Anatoliy Moguilev.

“In late April – early May, the sulfuric acid production facility will be commissioned. the total of about half a billion USD was invested in the project. Producing the adequate volumes of sulfuric acid makes it possible for us to build another titanium dioxide plant featuring a capacity of 120 thousand tons a year,” commented Mr. Firtash.

According to Mr. Firtash, at the time when he acquired ‘Krymskiy TITAN’, this plant featuring an installed capacity of 80 thousand tons of titanium dioxide, was only producing as little as 30 thousand tons a year. “We managed to raise the output to 105 thousand tons a year in 2010 and up to 108 thousand tons last year,” said Mr. Firtash. In addition to the multi-fold increase in the production outputs, the plant substantially expanded its distribution markets base – at present, its product is being supplied to 66 countries across all continents.

Mr. Anatoliy Moguilev noted that ‘Krymskiy TITAN’ fully meets the requirements posed by the government of Crimea to industrial enterprises. “It is environmental safety, high wages for employees, tax deductions to the budget. ‘Krymskiy TITAN’ has been complying with all these criteria,” stated Mr. Moguilev.

The new plant will be producing 600 thousand tons of sulfuric acid a year while new production technologies will allow to dramatically reduce the discharges volumes. The newly installed 12-megawatt steam turbine will ensure a 40-percent saving in power consumption and 36-percent reduction of the natural gas requirement. The turbine will generate 96 million kilowatt/hours a year which is comparable with the annual power consumption by 280 multi-storey blocks of apartments.