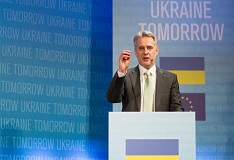 Federation of Employers of Ukraine

Agency for the Modernization of Ukraine

The Agency for the Modernization of Ukraine was established in March 2015 upon an initiative of Mr. Dmitry Firtash, the President of the Federation of Ukraine. The Agency was created by Mr. Karl-Georg Wellmann, Head of the German-Ukrainian Parliamentary group, a Bundestag Member; Lord Risby, British MP; and Mr. Bernard-Henry Lévy, French public activist, writer and philosopher. The Agency for the Modernization of Ukraine was presented at the international forum Ukraine Tomorrow held by the Federation of Employers and the largest trade union organizations of Ukraine in March 2015.

It took 200 days to develop a clear comprehensive Plan for the Modernization of Ukraine, and in the autumn 2015 the work on the program of reforms was completed. The Federation of Employers of Ukraine, Ukrainian trade unions, experts, scientists of the National Academy of Sciences will present the program at the Congress of the Federation of Employers of Ukraine on December 2, 2015, in Kyiv. As reforms start to be implemented, the Ukrainian Restoration Fund will be set up to uphold the sustainable development of the economy and infrastructure.

“During 200 day we have to elaborate the clear program for modernization of Ukraine. It has to be the Master plan for Ukraine. Knowledge and experience of foreign and Ukrainian scientists and experts will be useful in Ukraine’s development. At that we have to understand that Ukraine doesn’t have resources for restoration. While the reforms are being implemented, we have to create an investment fund amounting not less than $300 bn”, said Dmitry Firtash, the FEU President and initiator of the Agency for the Modernization of Ukraine.


In the framework of the Agency eight streams led by the influential European politicians and experts were created. The European integration work stream will be led by Gunther Verheugen, European Commissioner for the EU Enlargement in 1999-2004. The economic work stream is under the guidance of Waldemar Pawlak, one of the most influential politicians serving as the Vice-Prime Minister and Minister of Economy of Poland in 2007-2010, and as the Prime Minister of Poland in 1992-1995. Trade affairs belong to the jurisdiction of Lord Mandelson who used to work with Tony Blair’s and Gordon Brown’s governments later serving as the European Commissioner for Trade. Otto Depenheuer heads the constitutional reform work stream and anti-corruption activities are elaborated under the guidance of Włodzimierz Cimoszewicz serving as the Prime Minister of Poland in 1996-1997 and after that, in his capacity of the Foreign Minister of Poland (2001-2005), he signed the Agreement on Polish accession to the EU. The law enforcement-related proposals will be supervised by Lord McDonald who served as the Prosecutor General of England and Wales in 2003 – 2008. Based on intensive preparatory work of the "Doctors without Borders" organization founder and the former Minister of Health and Foreign Affairs of France Bernard Kouchner, the healthcare work stream is led by two personalities: Paul Robert Vogt and Ilya Yemets.

The Agency for the Modernization of Ukraine creation was preceded by the two international Round tables held in Vienna and initiated by the German-Ukrainian Forum in 2014. During the event, influential experts, politicians and businessmen from Ukraine, Russia, France, Germany and Great Britain discussed the steps necessary to be done by Ukraine and other countries in order to restore peace, stabilize situation in Ukraine, and defuse military, political and economic tension in Europe.

“We have to show, that Ukraine and Europe are united. It is commonly discussed: Ukraine is in Europe or not. Ukraine was and will be in Europe. And we see at what price Ukraine reaffirms its position”, said Dmitry Firtash.


In his speech at the forum Ukraine tomorrow, John Whittingdale, a member of the British Parliament, said that British Prime Minister James Cameron had expressed his support for the initiative of the Agency for the Modernization of Ukraine establishing. “I spoke with the Prime Minister of Great Britain. He said that we can help, but the Ukrainians must fight corruption. We can send billions of dollars of aid, and we see quite effective leaders in the industry. Before we talk about money, we have to create a strategy. The challenge is of incredible magnitude, but we have the tools. I am glad that Ukrainian trade unions, and both employers and investors are represented in the initiative”, said John Whittingdale.