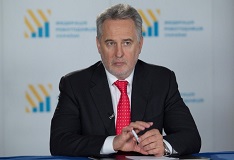 Dmitry Firtash: The US Have Failed in Ukraine

Entrepreneur Dmitry Firtash on Ukraine, his plans, his reputation and the politics he doesn’t want to know about.

Dmitry Firtash is one of the most controversial entrepreneurs in the Ukraine, with formerly close ties to deposed president Viktor Yanukovych, to whose innermost circle he belonged. Since spring 2014, he has been based in Vienna, after being temporarily detained on a warrant from the FBI. However, his extradition was refused. The case is currently under appeal, which is why a number of sensitive topics related to the case remained unanswered when KURIER spoke to him in a luxurious inner-city palace.


KURIER: You’ve been stranded in Vienna. Do you regard your stay here as temporary or permanent?

Dmitry Firtash: It’s complicated. I’ve been here for almost two years. As you know, I am waiting for the appeal to be heard. And, depending on the result, I will be able to make my decision about going home. To say that I’ve been stranded is not really putting it very well. I would describe the past two years as very useful. I have known Austria for many years. But I hadn’t ever spent a long time here. Austria is like a good bottle of red wine. When you open it, you have to wait until it develops its bouquet. You begin to understand the country, to feel it. The most important thing is that legal certainty prevails here. I have travelled a lot in Austria. It was very interesting. There are some places I really love: the Salzburgerland region, for skiing.


You mention “order”. In the end it was unrest, or “disorder”, if you like, that brought about your stay here. When you look at the situation in Ukraine at the moment – Economy Minister Abromavicius has just resigned – what is your assessment?


What I see today in Ukraine is the failure of US policy. In my view Ukraine is led by external powers. And that is not particularly effective. Ukraine is not the only example. We have seen that US policies were unsuccessful in the Middle East and in other countries. And above all, that Europe is suffering as a result. The key word here is migration. However Ukraine is Europe. And I am convinced that the EU does not want the 45 million people in Ukraine to turn into a flow of migrants because the state collapses. I am convinced that Ukraine can become a massive market for Europe. However, Abromavicius’ resignation tells me that the current government is politically bankrupt. There is no reform program. And it seems as though the most important thing for these politicians is to sit on state-owned enterprises and to profit from them.


In principle, of course, a framework does exist for this market for Europe you mention – the Association Agreement with the EU. However you were close to the very government which rejected that agreement.


In 2013, the question in Ukraine was whether to join the Russian customs union or the EU. My position was then, and still is, that it should not be an either/or situation. Instead, Ukraine could become a bridge. My position was that the Association Agreement should be signed. But with a nuance – we wanted the EU and Russia and also Ukraine all to come together on this topic. And we were right: we lost the Russian market, and the effects on the Ukrainian economy are catastrophic. We cannot expect that the EU will fill this gap. I still say today that all three of us must sit down together and find a solution. The last thing Europe needs today is a poor Ukraine.

When you talk of political and economic bankruptcy in Ukraine, it sounds a little as though you might have a political plan, or a project. In an interview with Reuters recently, you spoke of an “alternative” that is needed.

A political alternative is needed. However, there are many politicians in Ukraine, many people who talk a great deal. Starting with the President and the Premier. They have attended many investment forums, but when you ask them, show me a project in Ukraine that people can invest in, they don’t have an answer. There are none. They just talk about them. And they talk about reforms. But that’s all they do. It’s all PR. Why? Because it was only meant as PR. When that became clear, we – the employers’ federation and the unions, that is – made our own proposals. We met with each other, which isn’t easy, as you can imagine. And we founded the Agency for the Modernisation of Ukraine (AMU). And they then developed a program together.

But do you have ambitions to enter politics?

There are too many politicians in the Ukraine. I am an entrepreneur. And that’s what I will continue to be. However, those who offer criticism should also offer solutions. That is why we wrote our own plan and also presented it. We are ready to enter into dialogue. But it is clear today that the Parliament and the Government do not want to enter into dialogue. They are like fish in an aquarium. One day they swim to one end of the aquarium, and the next day to the other end. They live from one day to the next. That’s why they don’t have a program up to 2025.

This rejection of the AMU proposals – would you say that it has something to do with you personally and the fact that your reputation in Ukraine is poor in some respects?

No, I don’t think so. They just don’t want to acknowledge it, because if they acknowledged this program, it would mean admitting that they are not doing anything themselves. Because the truth of the matter is that this program should have been drafted by them. To give an example, the minister who just resigned said a few weeks ago in Davos that Ukraine must become an industrial platform for Europe. Interestingly, he then went on to mention a whole series of points from our program. They didn’t mention that these points come from us. As for me, I don’t have a problem with that. What counts is the result.


You say that Ukraine is being governed by foreign powers. In your particular case, and given that you are in Vienna and not in Kiev, who do you think is behind it? The US, or the Ukrainian authorities?

In my case, I think Minister for the Interior Avakov and Prime Minister Yatsenyuk are working with the Americans. The number one goal is to prevent my return. The annual conference of the employers’ federation was supposed to take place on 2 December. And a memorandum was supposed to be signed there, accepting the AMU proposals. In the 25 years of Ukrainian independence there has never been an incident where the airspace was closed to private jets. Charges were fabricated – twenty different ones. Without foundation. Armed personnel were brought to the airports. Then they said my passport would be taken away and both my entry and my return to Vienna would be prevented. We decided that the risk was too great. Also, and above all, because of the court proceedings in Vienna. I have to be in Vienna for the appeal hearing, and if I didn’t turn up it would be a real problem. Firstly because of the bond and secondly for my reputation. So I remained in Vienna, and I will remain until the whole court process has been completed.

You believe in the collapse of the government. Is Ukraine also facing collapse?

There is that risk, but I consider it to be a low risk still. But in relation to the Government, we are seeing this happen right now. This government has to resign. It is not as though this government and this premier were merely unpopular. They have downright negative ratings. That’s not because they have implemented unpopular reforms, but because they have done nothing at all. Today Ukraine is in a very difficult situation. The past two years – which could have been an opportunity – have been lost to us.

Critics say, here is someone who is proposing reform now and speaking against corruption, who was close for a very long time to a president who proved himself to be extremely corrupt.

I will never deny that I supported Yanukovych. I did support him. When he came into office I believed he was the man who could implement reforms in Ukraine. And he actually did that, when he entered office in 2010. But the problems began when he implemented various constitutional changes and consolidated more and more power in the presidential administration.

Nevertheless, you made a large fortune under President Yanukovych.

That wasn’t just under Yanukovych. I have had very successful companies for many, many years. And I can say that, of all the successful entrepreneurs in Ukraine, I am the only one who made his money outside Ukraine and only then invested in Ukraine. Why? For my managers, Ukraine is a risk. For me, Ukraine is my life. I have always planned, and still plan, to return to my village one day and to live there. So to say that I made a lot of money under Yanukovych is not quite true. And apart from that, I didn’t participate in the privatisation in Ukraine: I bought my shares afterwards from second or third parties. So I can say that I did not profit from privatisations.