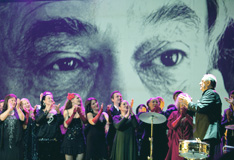 The festive program consisted of a screening of films starring Mr. Stupka, and a special ceremonial night organized at Ivan Franko Theater in Kiev.

The jubilee screening program commenced on August 19 with the presentation of a film “And A Warm Heart” (2008, directed by Krzysztof Zanussi). For seven consecutive nights, a centrally located movie theater “Ukraine” was gathering multiple aficionados of Bohdan Stupka’s talent who were able to enjoy the best pictures starring the actor and shot over the past 40 years. The screening showed four retrospective films which the maestro regards as most important benchmarks in his creative career, including “Plato Angel” based on O. Kolomiyets’ play “The Wild Angel” (dir. Ivan Voytiuk), “God, Forgive Us Sinners” based on A. Chekhov’s novelette (dir. Artur Voytetsky), a biopic picture “Highlights of Ostap Vyshnia’s Life” (dir. Yaroslav Lanchak) and the actor’s film debut “The Black-Spotted White Bird” (dir. Yuriy Illyenko).  Noteworthy, the total audience of this film upon its release in 1970 exceeded 10 million viewers.

The festive screening program ended with a premiere presentation of a family saga “The House” (2011) from a Russian director Oleg Pogodin.

The sequence of performances devoted to the actor’s jubilee culminated in a dramatized “Concert #70 from Stupka” starring the hero of the night.

Over a thousand guests attending this performance witnessed a unique show blending the actor’s autobiographical reminiscences, a retrospective look into his creative career and numerous greetings from his friends and colleagues.

The show opened with Mr. Stupka singing Louis Armstrong’s Let My People Go. “Our life is an endless improvisation and therefore our life is all about jazz,” were Mr. Stupka’s opening words. After that, he made himself comfortable at a drums set right there on the stage and would triumphantly hit cymbals every time someone was congratulating him.

The show was hosted by the actor’s son Ostap who was the first to send his greetings and wishes, and to express his gratitude to his great father. Later, Mr. Stupka’s grandson Dmytro and granddaughter Ustyna joined the greetings.

The family’s words of love were followed by congratulations from the world’s renowned theatrical director from Georgia Robert Sturua. A very moving dance was performed for Mr. Stupka by the concert’s youngest participants, a children’s dancing band from Lviv “Tsiomochki”.

Quite a few famous talents from Russia sent their video-addresses, including G. Volchek, A. Kaliagin, S. Garmash, V. Zolotukhin, M. Shvydkoy, L. Yarmolnik, K. Raikin and many others. “Bohdan Stupka managed to grow a rich harvest from the seeds of talent the God blessed him with,” said. G. Hazanov.

Oleg Skrypka and an a capella band Pikkardiyska Tertsiya performed their special jazz arrangements for Mr. Stupka. Then came the turn for a presentation prepared by the actor’s ex-mates at Lviv Drama Theater followed by a jocular extravaganza starring leading actors from Ivan Franko Theater. Guests from Lviv performed funny limericks based on Stupks’a favorite traditional song “Kateryna, C’mon Open the Door” while his Kiev colleagues built their show on a parody to once extremely popular hit “The Nature Carries No Bad Weather”. Stupka met the friendly and cordial humor of the show with a lot of laughter and contributed into the sparkling wittiness of the night. After the show was over he bowed to the audience saying: “Thanks for your endurance with which you withstood those amateurs”.

The show ended the way it started – with jazz. The closing song was another hit of Stupka’s most celebrated jazzman Louis Armstrong – a Ukrainian-language remake of What a Wonderful World sung by all actors of Ivan Franko Theater troupe.

The audience thanked the hero of the night with long standing ovations. Closing his jubilee concert, Stupka thanked all the guests, his family, the theater troupe. He addressed his words of appreciation to Mr. Dmitry Firtash, Head of the Board of Directors of Group DF. “I am most sincerely grateful to Dmitry Firtash. Without his financial support this great event wouldn’t have been possible. It is owing to him that we were able to please the audience with this show, to demonstrate the well-known films and present new ones. Down the road for us is yet another premiere – Chekhov’s “The Cherry Orchard” where I will play with an impressive cast of Ukrainian and Russian actors. The charity support to projects like these is extremely important, Ukrainian culture and art would have had very hard times without it. Ukrainian spectator is the best spectator in the world and their applause and gratitude is the best reward for both the actors and the patrons,” said Stupka. According to him, the movie and the theater make up just one fragment of the entirety of opportunities to preserve Ukraine’s cultural wealth. Dmitry Firtash does it is a broader fashion – he is supporting the Cambridge Ukrainian Studies Program, donates to the construction of the Ukrainian Catholic University in my native city of Lviv. It was his support that enabled the organization of the Poetry Festival in Chernivtsi and the celebration of the 75th anniversary of Kherson Regional Academic Theater. “We are citizens of one country and it is a duty of everyone to preserve its cultural legacy. I am sure that people making it happen are genuine patriots of Ukraine,” added Bohdan Stupka.

Mr. Firtash in return pointed out that Bohdan Stupka clearly achieved his goal as an actor – to tell the world as much as possible about Ukraine. “Bohdan Stupka is a great actor of our time who has done so much for each and every one of us. He created characters that helped many to comprehend Ukraine’s history and present, its unique identity and its controversies,” said Mr. Firtash. “Stupka is known and dearly loved all across Ukraine and far beyond. He is a Ukrainian of a global scale!”