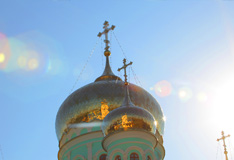 Dmitry Firtash has provided charity support to the Construction of the Holy Trinity Cathedral of Bancheny-based Holy Ascension Monastery in Chernivtsi region.

The Cathedral erected with funds raised by the Orthodox community and owing to a charity donation from Mr. Dmitry Firtash is one of the largest Orthodox temples in Ukraine and in Europe. Thousands of volunteers including the Monastery brethren took part in the construction effort. Over 60 artists contributed into the Cathedral mural decoration. Part of the frescos was performed using an ancient technology. Unlike the majority of temples where decorations replicate the exiting paintings, the Holy Trinity Cathedral features unique artworks even though some of them reproduce widespread themes. For instance, the painting of the Holy Face of Jesus is based on the frescos authored by Victor Vasnetsov who had decorated the Saint Vladimir Cathedral in Kiev (in 1885 – 1896), though the Holy Trinity Cathedral’s frescos have their unique features.

The chancel of the Cathedral houses fragments of relics of holy innocents of Bethlehem, of saints of Kiev-Pechersk Monastery, as well as shreds of the Holy Cross of Jesus in Jerusalem.

The temple construction starting in June 2006 lasted for five years. It was initiated by the Father Superior of the Holy Ascension Monastery Rev. Longuin (who was awarded the title of the Hero of Ukraine in 2008).


On October 2, 2011, the Cathedral was consecrated by His Holiness Kirill Patriarch of Moscow and All Russia who lit the first candle and conducted the Divine Liturgy in the newly consecrated temple.

The consecration ceremony was attended by about 20 thousand believers from the neighborhood joined by pilgrims from other regions of Ukraine, from Russia, Belarus, Romania and Moldova. The Christians failing to enter the temple were worshipping within the Monastery perimeter watching the service live telecast on a number of big screens.

Following the Liturgy completion, the Patriarch addressed the congregation with his Primatial Word:
“I welcome you all here and congratulate you with this great event taking place on this land. The consecration of this grand cathedral fills my soul with rejoicing as it testifies to the live faith of the people. Never do golden-domed temples rise up to the skies unless there is strong momentum going bottom-up – from the people up to the skies, to the Lord. Then, many flow into this colossal spiritual current. Perhaps those who would have never given a thought to building a temple, join this current because they feel that the power is there, the power of faith, the power of prayer reaching up to the skies, bonding with the God and returning to the people with the God’s Grace.”

After the sermon, His Holiness Kirill Patriarch of Moscow and All Russia awarded Mr. Dmitry Firtash with the Order of Venerable Serafim Sarowsky, 2nd Degree in appreciation of his charity support to the Cathedral construction. The Order of Venerable Serafim Sarowsky, 2nd Degree was also conferred to Yuriy Boyko, Minister of Energy Sector and Coal Mining Industry. His Holiness also awarded the Monastery Father Superior, Rev. Longuin, who was a begetter and active participant of the Cathedral construction, with the Order of Prince Vladimir, 3rd Degree.

Patriarch Kirill thanked everyone contributing into the temple construction. “Within these walls you, along with volunteers, along with monks and nuns, along with your outstanding benefactors, you sacrifice, thereby fulfilling the God’s commandment. You are assuming the bearing of the cross to help the ailed, the weak and orphans.” The Holy Ascension Monastery is famous for its care for those who have difficulties finding support in the community, for orphans and disabled children. There is an orphanage operating under the Monastery auspices and quite a few of its inmates have limited abilities.

In 2011, a care center for incapacitated children was founded at the Monastery which Patriarch Kirill also consecrated after the Divine Liturgy.

His Holiness Kirill Patriarch of Moscow and All Russia awarded Mr. Dmitry Firtash with the Order of Venerable Serafim Sarowsky, 2nd Degree. The entrepreneur received this high decoration for his charity support to the construction of the Holy...