Zaporozhye Titanium and Magnesium Combine (ZTMC LLC), a part of titanium business of Group DF, has launched industrial-scale production of titanium ingots, slabs and alloys – higher added value products. Owing to innovations in production, the company has not only diversified its range of products, but also extended its production chain.

“We have effectively begun production of ingots and slabs on an industrial scale. Currently, our production capacities allow producing over 1,000 tons of new the products annually. We consider future expansion of production up to 12,000 tons per year,” explained Volodymyr Syvak, ZTMC Director.

The company has also adopted a technology for production of alloys, including alloys of titanium with aluminium, and with oxygen. Market researches showed that these alloys are in great demand.

ZTMC invested UAH 12.4 million in new equipment for its titanium ingots production shop. The company has already upgraded an electron beam unit, and replaced electron guns. The titanium processing shop was also supplied with a modern computer system for melting process control. It allowed for automation of a number of processes, improvement of equipment reliability, and reduction of material loss during mechanical processing of ingots. Moreover, titanium processing shop was equipped with a modern bandsaw machine that is used for trimming of titanium ingots and slabs, and cutting-off their upper, main and lower parts. ZTMC has also made capital overhauls of three machines for mechanical processing of ingots, including two lathes and one longitudinal milling and boring machine.

NOTE
Today, ZTMC is the only producer of titanium sponge in Europe. New products are the result of advanced processing of titanium that opens new sales markets in Europe and Asia for the company. Titanium ingots, as well as slabs (ingots of rectangular cross-section), are widely used as the construction material for nuclear power plants, in chemical engineering, shipbuilding and in a number of other industries. Having launched the new production, the titanium business of Group DF has entered a new market segment which has good prospects. The world market consumes about 200,000 tons of titanium ingots and slabs per year.

Investments into modernization of ZTMC are a part of Group DF’s programme for Ukrainian titanium industry development. Until 2017, the Group plans to invest USD 2.5 million. According to this programme, Group DF plans to construct two new titanium slag and sponge production facilities at ZTMC. It will result in titanium sponge production capacities increasing to 40,000 tons per year, with titanium slag capacities increasing by 100,000 tons per year. It will allow Ukraine to increase its global titanium slag market from 0.66 percent to 4 percent, and its global titanium sponge market share from 5 to 14 percent. 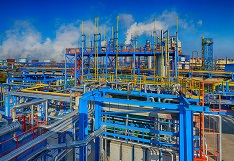