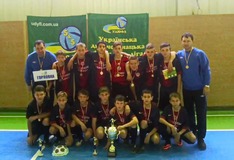 The competitions were held in Rubezhnoye town in Lugansk region. The tournament was attended by seven teams, two of which were from the Russian Federation. Young Gorlovka players won all eight matches. Thus, the team has won the championship title for the third year in a row.
The participation of the team “STIROL-OSh #2” in the competition was traditionally supported be the OSTCHEM holding owned by Dmitry Firtash.

Young Gorlovka sportsmen are multiple champions of Ukraine. In addition, the STIROL players won international competitions in Russia and Spain. The coach of the team Nikolay Krykun noted that STIROL players were the four-time winners of the Cup of Ukraine, proving that there were no equal to them in our country.

“Our guys have once again proved their superiority over rivals. This is an accomplishment not only of the team and the club staff, but sponsors, to whom, on behalf of all the students, parents, and fans, I would like to express my gratitude”, said the coach of young champions Nikolay Krykun.