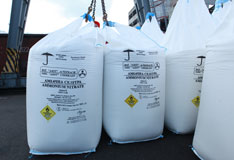 The consolidation effort in the chemical sector helped domestic nitrogen fertilizers manufacturers to regain 30 percent of Ukraine’s market from Russian competitors over the past year alone, said Mr. Dmitry Firtash, Head of the Joint Employers Movement of Ukraine and Head of the Board of Directors of Group DF in his interview to Den daily.

As Mr. Firtash explained, before the consolidation, Ukrainian nitrogen industries were basically standing idle, their impact on the market being virtually negligible: ‘Before the fertilizers market was consolidated in Ukraine, everyone felt at home around here. Ukraine was being completely neglected – all enterprises would function at 20 % of their capacity. Over a year, we put in place a clear market strategy, and now plants operate at a 110-percent capacity.’

Mr. Firtash also stressed that massive modernization efforts along with sizeable investments in the development have been implemented at consolidated enterprises.

Head of the Board of Directors of Group DF is confident that Ukrainian chemical sector consolidation is the only key to securing its development and competitiveness both domestically and internationally. ‘If we are strong and we know what we are doing, we will be reckoned with.’

Dmitry Firtash has been investing in the development of four Ukrainian mineral fertilizers producers, namely: STIROL Concern (Gorlovka, Donetsk region,) AZOT (Cherkassy), Rivneazot and Severodonetsk AZOT (Lugansk region). Part of the total of about $1 billion worth of investments in these companies in 2011 was channeled into technological upgrade programs which will enable an increase in production outputs. According to the data of the State Committee for Statistics, the nitrogen fertilizers outputs have recorded a 30.4 percent rise over the period from January through September 2011.