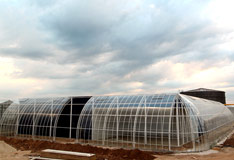 Mykola Prysiazhniuk, Ukraine’s Minister of Agricultural Policy and Food Supplies visited the village of Synkiv where the construction of a major greenhouse complex is nearing completion. This facility is expected to rank among the largest enterprises across Eastern Europe and in the meantime, as the construction effort is still underway, the site and the works scale have no matches in Europe, according to Mr. Prysiazhniuk.

The Minister also pointed out that by relying on most advanced technologies of transplants cultivation and planting, a computerized system of drip watering and fertilization control, the facility will feature extraordinary performance parameters.

“As we have seen the greenhouse facility, we have no doubts that it will be a one-of-a-kind enterprise not only in Ukraine but also in Europe. The territory of Ukraine is very conducive to growing vegetables, especially on protected grounds. This is about 46 million consumers, plus neighboring markets with a good demand for vegetables. Second of all, our geographical position enables domestic produce exportation to many countries,” said Mr. Prysiazhniuk.

The erection of the Synkiv facility was initiated and financed by Dmitry Firtash, Head of the Board of Directors of Group DF. It is expected that the greenhouse will annually produce 4 thousand tons of tomatoes and 1.55 thousand tons of peppers.

Mr. Firtash commented that the greenhouse complex will underlay the rebirth of the village of Synkiv. “I was not pursuing the goal of developing an agricultural business. For me, the greenhouse project has been a way to help my home village. New jobs have been created, budget revenues will be generated as well as more cash to develop the local infrastructure,” explained the entrepreneurs. “This is my home land where I was born, and I was only driven by a commitment to help. I started building a school, a culture club, a kindergarten. However, eventually we ran into a problem: the community has no way to make money to pay gas and energy bills, to pay wages to villagers. Thus, we started thinking about the business capable of raising the community’s living standard. We chose greenhouses because growing cucumbers and tomatoes has been a traditional business for Synkiv. I myself used to sell tomatoes at the market with my Mom before I turned 17,” told Dmitry Firtash.

He further added that the past twenty years have seen the disappearance of 360 villages across Ukraine. “These communities may be reanimated by a business that will create new opportunities, new jobs. For the Federation of Employers of Ukraine, this is a key issue and I hope we’ll make it happen,” concluded Mr. Firtash.

The greenhouse complex will employ the most advanced technologies including the non-stop lighting and drip watering of the plants. The fertilizers and mineral nourishing liquid feeding will be controlled by a computerized system which will help professionals from the Netherlands and Israel carry out the remote supervision and monitor all stages of plants cultivation.

Officials in Ukraine’s Agricultural Ministry estimate that the country needs to put up about 500 hectares of greenhouses in order to meet the national demand in greenhouse-raised vegetables and to turn down their imports. Mr. M. Bezugly, First Deputy Minister of Agriculture of Ukraine argues that Ukraine is faced with a real shortage of greenhouses which explains the massive volumes of vegetables importation into Ukraine.

“Greenhouse-raised vegetables import may only be reduced if at least 500 hectares of greenhouses are built in Ukraine. Last year this effort was initiated and the first 44 hectares of modern greenhouses are already available. We estimate that in 3-4 years, Ukraine will become an export-oriented country, including vegetables exports,” says Mr. Bezugly.

The Synkiv greenhouse complex will be the first facility in Ukraine where peppers will be grown in industrial volumes. The domestic market is being dominated by produce from Iran, Turkey, Spain, Israel and the Netherlands. The outputs grown in Synkiv greenhouses will be equal to about 20 percent of the imported volumes which will signify a substantial growth of the domestic produce share in Ukraine’s market.