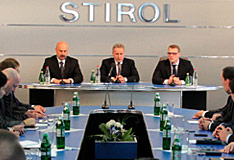 Speaking during his visit to Gorlovka-based STIROL concern being part of his Group DF, Mr. Dmitry Firtash, Head of the Board of Directors Group DF, projected that the volume of domestic mineral fertilizers market will double by 2017.

“We are positive that the Ukrainian fertilizers market will double within 5 years to come. Even the most pessimistic outlooks show an at least a 1.7-times growth. We have a lot confidence in these forecasts which is why we invest in our enterprises,” explained Mr. Firtash.

According to the outlooks published by OSTCHEM (a company operating Group DF’s nitrogen chemical productions), by 2017 the nitrogen fertilizers consumption volumes will rise from the current 950 thousand tons up to 2 million tons, phosphates – from 225 up to 460 thousand tons, potassium fertilizers – from 125 up to 270-280 thousand tons.

According to his assessments, soon enough the volumes of fertilizers consumption in Ukraine will reach those recorded in Europe. “Fertilization is a key to efficient agriculture, a key to farmers’ profitability,” stresses Dmitry Firtash. The Head of the Group DF’s Board of Directors is sure that an increase in fertilizers consumption will inevitably bring about a rise in agribusiness efficacy. “The statistics clearly shows that about 79 companies – large agribusinesses – control 5 to 5.4 million hectares of land. These are quite massive companies and obviously, they are struggling for high yields while high yields are directly related to the volumes of applied fertilizers,” concluded Mr. Firtash.


Group DF is a private international group of companies whose interests and assets are concentrated in the energy sector, chemical industry, energy production infrastructure, agriculture and real estate.

In 2011, Group DF invested about $1.15 billion in Ukrainian nitrogen chemical enterprises while the 2012 investment will amount $0.94 billion. The total of capital investments in Group DF’s chemical businesses planned for 2013 is expected to be in the order of $1 – 1.2 billion.