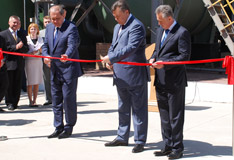 President of Ukraine Victor Yanukovych cut the ribbon inaugurating a new sulfuric acid production facility at the Eastern Europe’s largest titanium dioxide enterprise Krymskiy TITAN. The guests of honor at the ceremony were Head of the Board of Directors of Group DF Mr. Dmitry Firtash, Prime-Minister of Crimea Mr. Anatoliy Moguilev and Chairman of the Supervisory Board of Krymskiy TITAN Mr. Alexander Nechaev.

“The titanium production development in Ukraine will enable substantial augmentation of Ukraine’s position in international titanium markets,” said Mr. Firtash, a shareholder in Krymskiy TITAN. According to his projection, Ukraine’s share will rise from the current 3 up to 6-8 percent of the global market.

Titanium dioxide is widely used in industry. Ukraine has a remarkable potential for developing this sector as some 20 percent of the world’s deposits of titanium ores are concentrated in Ukraine.

Mr. Alexander Nechaev, Chairman of the Supervisory Board of Krymskiy TITAN commented that the new plant absolutely meets the most stringent of environmental standards. “The sulfuric acid production technology makes it possible to make the best use of all resources without polluting the environment. We are now able to restrain a huge volume of discharges,” argued Mr. Nechaev.

The commissioned sulfuric acid production facility accounts for the largest investment on the Crimean peninsula over Ukraine’s independence period. The total of investments has been 917 million UAH while the repayment period is estimated to be some 4.5 years. The aggregate volume of investments made by Group DF in Krymskiy TITAN development is estimated to reach almost US$500 million.

Krymskiy TITAN has been one of the first chemical enterprises to introduce a quality control system, as well as environmental safety and labor protection systems meeting international standards ISO 9001:2004 and ISO 14001:2008. The sulfuric acid production technology at the new facility provides for a 100-percent utilization of heat generated in the production course, and its processing into steam and electric power (the turbine generator capacity is 96 thousand megawatts/year). This utility will help the company reduce the volumes of outsourced electric energy by 40 % and achieve a 35.9-percent cut in gas supplies.

Krymskiy TITAN is the largest titanium dioxide producer in Eastern Europe and CIS countries accounting for a 2-percent share of the global market.

About 90 % of exports account for titanium dioxide. Over 60 countries worldwide import titanium dioxide while in Russia, Krymskiy TITAN’s products boast almost 30 % share of the domestic market.