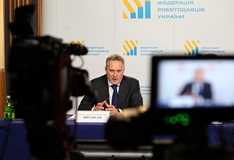 12 February 2014 Federation of Employers of Ukraine

During the meeting, the FEU Board members noted that today the Ukrainian government didn’t have an intelligible for society long-term plan for economy stabilization. All hopes are fastened on loans from international financial institutions and the difficult economic situation in the country is attributed to the armed conflict in Eastern Ukraine. Continued government inaction could lead to the loss of the Ukrainian statehood. “As a business we can not let that happen. We are responsible for hundreds of thousands of jobs that we need to save”, said Dmitry Firtash.

He added that the employers' position is  shared by the trade union organization. “We must work together – the Federation of Employers and trade union organizations – to unite our efforts. Together, we represent people who give jobs, and people who are hired. We must say clearly that we are not satisfied with what is happening in Ukraine. The country comes to a deadlock. Today, foreign investors do not trust Ukraine and do not invest in the country”, said Dmitry Firtash, noting that last year the outflow of investments from Ukraine amounted to about 8 billion. dollars.

“Today, unfortunately, the government chose the position of war. Everything will be attributed to the war. We understand that this is the “war party”. This is not a political slogan, it's true. And our task is to make the “party of peace” because our party is Ukraine", said the FEU President. “We need to show people that there is another position. Not just the war position, but position of peace. And to show people who is willing to take on this responsibility. And I believe that this is an opportunity when the Federation of Employers and trade unions can do it”, said Dmitry Firtash.

According to Dmitry Firtash, on March 3, the Federation of Employers jointly with the trade union organizations will hold the international forum where the economic modernization plan for Ukraine will be presented.

Leading businessmen and politicians of Germany, France, Great Britain, Poland and other countries will come to the forum. “Europe, the European Union will first rely on the Federation of Employers and trade unions. The Europeans truly believe that these are forces that can implement reforms in Ukraine. This is very important because Europe is looking for partners to be represented by Ukrainian business and trade unions”, stressed Dmitry Firtash.

“The situation however may be altered: according to estimates of machine building enterprises being members of the Federation of Employers, this share may be raised up to 40 percent of the GDP,” maintains Dmitry Firtash