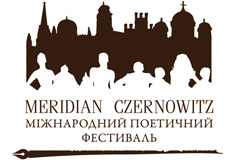 The 3rd International Poetic Festival MERIDIAN CZERNOWITZ attended by representatives of 12 countries has started in Chernivtsi. This unique cultural event has become a reality largely owing to the support from Dmitry Firtash’s Group DF being its General Partner for the second year in a row.

The Festival will take place from the 6th through the 9th of September. This year MERIDIAN CZERNOWITZ will be conducted under the motto “One Festival – Three Cities: Kamyanets-Podilsky, Khotyn, Chernivtsi”. The principal stage will be based on Chernivtsi while literary readings will be organized in Khotyn and Kamyanets-Podilsky. The Festival participants will be accompanied by numerous journalists representing both Ukrainian and foreign media.

A new of feature of this year’s Festival is the International Book Tradeshow presenting publishing houses from Ukraine, Poland, Austria, Switzerland and Germany.