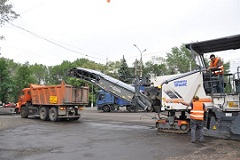 Gorlovka concern STIROL being part of OSTCHEM renovated 1.3 km of road on the Gorlovskoy Divisii street which connects the enterprise with the city center. The total budget of the repairing works is estimated to amount 2.5 million UAH.

Roads reconstruction is part of the Preserve Your City program initiated by the Chairman of the Group DF Supervisory Council, President of the Federation of Employers of Ukraine Mr. Dmitry Firtash. He urges municipalities’ principal employers and large businesses to help communities they are based in.
The main objective of the business social responsibility program is improving social standards in cities around industrial enterprises of Group DF.

So, for the last three years Stirol allocated five million UAH to support charitable programs of which three million were allocated in 2012.

“Construction of roads is one of the most important parts of corporate social responsibility conducted by OSTCHEM holding and Group DF. Recently Rivne Azot performed a major overhaul of the road 1.5 km long in Rivne, and Cherkasy Azot revolutionized the city's central square. In 2013 we plan to complete the renovation of several city thoroughfares”, said General Director of OSTCHEM, Chairman of the supervisory board of Concern Stirol Alexander Khalin.

Other capital repairs of roads are planned to be made in 2013 for concern’s funds. In the current year, Stirol will redesign the main Gorlovka concert stage – cultural, sports and commercial center "Stirol". The company will allocate funds to renovate 6 city trams and will assist the municipal tram and transport management.

PJSC "Concern Stirol" is one of the largest chemical producers in Ukraine. In September 2010 Concern Stirol entered the OSTCHEM holding which incorporates nitrogen fertilizers producers of Group DF. The company is specialized in production of ammonia, nitrogen fertilizers, plastics, chemicals, chemical products of high purity, paints and varnishes.