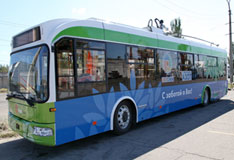 The city of Severodonetsk has received 10 new trolleybuses a charity gift from the local Azot plant. The total cost of the vehicles is 16 million hryvnias.

The ceremony of the vehicles donation to the municipality took place Tuesday in the city’s central square.

Speaking at the ceremony, Mr. L. Bugaev, Chairman of the Board of Severodonetsk Azot stressed that this charity support is initiated by the company’s owner, Mr. Dmitry Firtash: “Dmitry Firtash is a consistent proponent of imperative assistance that large employers should provide to communities they are based in. Severodonetsk Azot is reviving and so is the city being home for it,” said Mr. Bugaev.

The trolleybuses acquired from a Belorussian manufacturer enable a 40-percent renovation of the municipal trolleybuses park. The new AKSMs-321 perfectly meet modern requirements to public transport and feature high seating capacity (up to 100 passengers). On top of that, these trolleybuses are 35 % more economical than the outdated machines servicing the citizens up to now.

Mr. Dmitry Firtash, Head of the Board of Directors of Group DF and Head of the Joint Employers Movement of Ukraine advocates the possibly widest spread of a practice of large employers’ support to communities where they operate. This principle is actively implemented by all companies owned by Mr. Firtash.