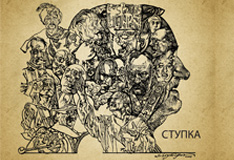 The celebration of the 70th anniversary of Ukraine’s great actor Bohdan Stupka is on featuring retrospective and premiering films he stars in. The jubilee events are organized with support of Mr. Dmitry Firtash, Head of the Joint Employers Movement of Ukraine and Head of the Board of Directors of Group DF.

From 29 September through 5 October, the Kiev-based movie theater “Ukraine” will host a screening of four retrospective pictures and three premieres starring Mr. Stupka.

The screening was opened with a theatrical premiere of a dramedy “And a Warm Heart”, a Ukrainian-Polish joint production (2008) directed by one of Europe’s leading film-makers Krzysztof Zanussi. For his leading role in this film Bohdan Stupka was awarded the Silver Marc’Aurelio at the Rome International Film Festival.

The retrospective films are very personal benchmarks for Bohdan Stupka. This first and foremost refers to a biopic picture “Highlights of Ostap Vyshnia’s Life” (dir. Yaroslav Lanchak, 1991) and the actor’s film debut “The Black-Spotted White Bird” (dir. Yuriy Illyenko, 1970). The festive screening program will culminate in a premiere presentation of a family saga “The House” from a Russian director Oleg Pogodin.