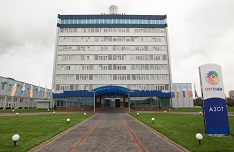 Rivne Azot intends to buy free apartments in the residential complex “Golden Horseshoe” and to build new high-rise buildings for Rivne Azot employees. This was stated by the Chairman of the Group DF Supervisory Council Dmitry Firtash during his visit to the enterprise.

The project on building a new living district for chemists is a part of the Preserve Your City program initiated by Dmitry Firtash.

“We have agreed with the governor and the mayor of Rivne that we would take 14 hectares of land to continue construction. There is a one house already, and we are planning to build several houses more”, – said the owner of Group DF.

In the future, a new living district for chemists is planned to be built. The new district will include not only houses, but also a necessary infrastructure. In particular, there is a school near the residential complex “Golden Horseshoe”, and Rivne Azot is ready to invest in construction of a new kindergarten for the enterprise employees’ children, said Dmitry Firtash.
“For buying new flats our employees, especially young professionals, will get a preferential loan at low interest. We're going to build housing for our employees, we will agree with the lending banks about loans under 5% in local currency for a period of 10-15 years”, – said Dmitry Firtash.

The President of the Federation of Employers of Ukraine also noted that Rivne Azot had already built one house, most of the apartments in which the enterprise had given to young professionals. Mr. Firtash also added that about 30 apartments had been handed over to the city for citizens in need of better housing.

The Head of the Rivne Regional State Administration Vasyl Bertash noted that the construction of the residential complex “Golden Horseshoe” had begun in 2005. According to him, the social object will have all necessary infrastructures including kindergarten for employees’ children.

The Head of the region also noted that Rivne Azot was a reliable partner in the implementation of social projects. Rivne Azot, pays for about 50% of all tax revenues to the Rivne budget and about 15% of fiscal revenues to the regional budget, provides financial assistance to the nunnery, orphanages, boarding schools, hospitals and schools. Rivne Azot has carried out reconstruction of 1.5 km of the roadway adjacent to the plant, which serves as the main route for the local residents. By the end of 2013 Rivne Azot will carry out additional reconstruction works of 13,000 square meters of the roadways – both of the roads within the plant’s territory, and the public ones.