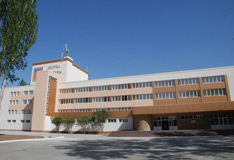 Culture Palace reconstruction has been done in Krasnoperekopsk. All repairs and reconstructions have been performed as part of the effort towards the implementation of “Preserve Your City” program initiated by Mr. Dmitry Firtash, Head of the Board of Directors Group DF. The funding to the project was provided by Krasnoperekopsk’s principal employer – Crimean Soda Plan owned by Dmitry Firtash.

Restoration of Krasnoperekopsk Cultural Palace is the largest social project implemented in the city during the last 20 years. The overall budget of the project amounted ca. 30 million UAH.

In the opening day of the city Culture Palace solemnly right to cut the red ribbon was granted the people's deputy of Ukraine Alexander Nechaev, Chairman of the Board of “Crimean Soda Plant”, the deputy of the Verkhovna Rada of Crimea Vladislav Shmelkov and the mayor Taras Filipchuk.

Speaking at the ceremony Taras Filipchuk said that after modernization Krasnoperekopsk Culture Palace could be considered the best in the Crimea.

To find out more about social responsibility of the Firtash Group of companies Group DF, please, visit “Preserve Your City”  and Facebook pages