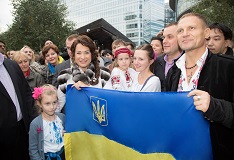 On 19 October 2013, the exuberant ethno-fair and gala concert in Potters Field Park on the Thames’ bank near the famous Tower Bridge crowned the Days of Ukraine in the UK, the three-day festival of Ukrainian culture, organized by FIRTASH Foundation and sponsored by Group DF. On this day, the guests had an opportunity to feel the atmosphere of a Ukrainian settlement, with its trade-fair, traditional Cossack entertainment and cuisine.

“Ukraine is very attractive to every European, and first of all, I would like to thank you so much for coming here today to support us”, said Lada Firtash, Chairperson of FIRTASH Foundation, as she addressed the participants from the stage.

According to the estimates of Potters Field Park administration, the ethno-festival on the Thames attracted about 40-45 thousand Londoners. The total number of Londoners and city visitors who watched the events that took place as part of the Days of Ukraine amounted to 110-120 thousand people.

Oleg Skrypka, one of the festival headliners, said that it was the largest festival in Europe he had ever seen promoting Ukraine as a country and revealing the Ukrainian spirit, and that it was truly unique and made Ukrainians proud of their country.

The big stage at Potters Field became the venue for such famous Ukrainian bands as folk-groups Astarta and Folkners, authentic ensemble Krosna, and classics of Ukrainian rock-stage Kozak System and Taras Chubai. The festival culminated with the music performance by cult Ukrainian band Vopli Vidoplyasova and ethno-group Le Grand Orchestra, with Oleg Skrypka as the frontman. Their performance made the public dance.

Days of Ukraine in the UK were held in London during 17-19 October 2013. On the first day of the festival, the Chairman of Group DF Supervisory Council Dmitry Firtash and the Chairperson of FIRTASH Foundation Lada Firtash were given the honours to officially open the trading at one of Europe’s largest financial platforms, the London Stock Exchange, to mark the opening of the Days of Ukraine in the United Kingdom.

It was followed by the official opening of the Days of Ukraine at the British Parliament with participation of Ukrainian and British government officials, public and business leaders. Later that night, the festival continued with a gala dinner at the Natural History Museum, where the representatives of political and business elites of the United Kingdom and Ukraine enjoyed an entertaining concert program.

October 18, the second day of the festival, was marked by a series of cultural events. The prestigious London Library brought together representatives of the British academic society for the literary soiree titled “From Shevchenko to Zabuzhko”. The guests joined in an interesting discussion about Ukrainian literature with Rory Finnin, Head of Cambridge Ukrainian Studies, and Oksana Zabuzhko, renowned Ukrainian writer. The evening culminated with a musical performance by the Telniuk Sisters to the accompaniment of three violins.

Also on 18 October, Saatchi Gallery, the most prestigious modern art gallery in London, saw opening of the Ukrainian art exhibition featuring paintings, installations and sculpture by 25 Ukrainian artists. This was followed by a fashion show featuring prominent Ukrainian designers. The sophisticated and demanding British fashion community greeted with applause the collections of Lilia Litkovskaya, Lilia Pustovit, Svetlana Bevza, the tandem of KamenskayaKononova, and Zinaida Lihacheva. This again demonstrated that Ukrainian fashion has successfully integrated into the European fashion.

The three-day Days of Ukraine in the UK cultural festival is over, but its organizers, the FIRTASH Foundation, say that there is more to come for the European public.

For more detail about the Days of Ukraine in the UK, its schedule and participants, please visit the projects official website, and Group DF social media.