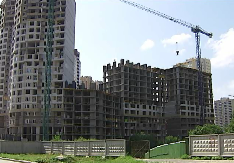 As part of the housing program for employees of OSTCHEM nitrogen enterprises, four apartment houses will be built annually. This was stated by the Chairman of the Group DF Supervisory Council Dmitry Firtash during the teleconference with employees of Concern Stirol, Cherkassy Azot, Severodonetsk Azot, and Rivne Azot.

“In every city where our enterprises are operating we plan to start building one house for enterprises’ employees every year, that is, four houses should be built each year. Estimated costs that we see are about UAH 50 mln., if we build houses with our own forces”, said Dmitry Firtash answering the question of Concern Stirol employee.

The businessman said that apartments could be bought on preferential loans against 6 percent per annum in hryvnia. “With the current deposit rates and inflation – these are, in fact, free loans. Nadra Bank is ready to allocate these loans for 15-20 years from funds that are reserved by the enterprises in their accounts”, said Dmitry Firtash.

The Group DF owner said that Nadra Bank was operating stable. “Nadra Bank is based on the real economy - the enterprises in which you work, and dozens of other equally powerful enterprises. This is a constant turnover of money. So I do not see any problems in the bank”, said Dmitry Firtash. He added that it was decided to provide the bank with loan of UAH 700 million. The bank has already received UAH 300 million.