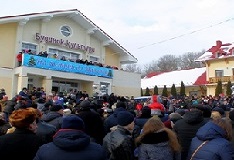 On January 14, 2017 Synkiv village, Dmitry Firtash’s small motherland, hosted about three thousand people from all over Ukraine marking the national holiday of Ukrainian Malanka. In folklore and ethnographic festival "On a visit to Malanka" 25 creative teams of Ternopil and Chernivtsi regions competed for the Malanka of the year title. The festival was initiated by Dmitry Firtash, the Chairman of the Group DF Supervisory Council, who was born and raised in Synkiv.

Festival organizer Maria G. Firtash noted that Malanka was one of the visiting cards of Bukovyna, where it has been preserved in authentic form. “For us it is very important to preserve the rite of Malanka in the form in which it existed hundreds of years ago. We want to pass the tradition to the younger generation, and we hope that the festival will attract the attention to the holiday and keep the flavor of the Ukrainian culture for future generations”, said Maria Firtash.

Malanka parade with songs and dances passed through the Synkiv village — from the council building to the culture house where the scene was set. From noon until evening, the jury evaluated colorful performances of the teams. Suporki team became the winner of the festival and Malanka of the year, the creative team of Kolodribki won the second place, and the performers from Synkiv took the third place. All the participants received money prizes.

Malanka tradition in authentic form has been preserved mainly in Galicia and Bukovyna. The main characters of the holiday are Malanka, Vasyl, Cossacks and soldiers, bears and goats, Gypsies and devils, as well as contemporary characters from popular films and cartoons.

The organizers believe that Malanka parade held in Synkiv will become a tradition, and they are waiting for even more guests the next year.