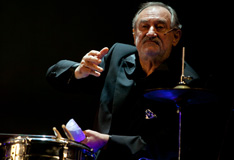 “Concert #70 from Stupka” has become a colorful conclusion of the sequence of events celebrating the 70th anniversary of the outstanding Ukrainian actor Bohdan Stupka. Financial support for these events was provided by Mr. Dmitry Firtash, Head of the Joint Employers Movement of Ukraine and Head of the Board of Directors of Group DF.

The festivities took place in a completely sold-out Ivan Franko National Academic Ukrainian Drama Theater. Over a thousand guests of the jubilee night met their favorite actor with a long standing ovation.

The performance combining Stupka’s autobiographical reminiscences, a retrospective of his creative career and ingenious congratulations to the hero of the night was opened by Bohdan Stupks singing Louis Armstrong’s Let My People Go. “Our life is an endless improvisation and therefore our life is all about jazz,” said Mr. Stupka’s opening the show and sitting at a drums set.

The first ones to greet the maestro were his grandson Dmytro and son Ostap acting as Stupka in his teens and youth, later joined by the actor’s granddaughter Ustyna. Oleg Skrypka and an a capella band Pikkardiyska Tertsiya performed their special jazz arrangements for Mr. Stupka. A special appearance on stage was the world’s renowned theatrical director Robert Sturua congratulating his old friend and creative partner. The performance played by the actor’s ex-mates at Lviv Drama Theater followed by a jocular extravaganza starring Ivan Franko Theater’s leading actors became one of the biggest hits of the night. Greeting on the anniversary’s occasion were sent by the President of Ukraine Victor Yanukovych, President of Belarus Alexander Lukashenko. Quite a few famous talents from Russia sent their video-addresses, including G. Volchek, A. Kaliagin, S. Garmash, V. Zolotukhin, M. Shvydkoy, L. Yarmolnik, K. Raikin and many others.

The closing song was another Louis Armstrong’s hit of – a Ukrainian-language remake of What a Wonderful World sung by all actors of Ivan Franko Theater troupe. The lyrics were specifically written for the jubilee by Yuriy Rybchynsky, one of the most celebrated poets of modern Ukraine.

Closing his jubilee concert, Stupka thanked all the guests, his family, the theater troupe. He addressed his words of appreciation to Mr. Dmitry Firtash, Head of the Board of Directors of Group DF. “I am most sincerely grateful to Dmitry Firtash. Without his financial support this great event wouldn’t have been possible. It is owing to him that we were able to please the audience with this show, to demonstrate the well-known films and present new ones,” said Stupka.

Mr. Firtash in return pointed out that Bohdan Stupka clearly achieved his goal as an actor – to tell the world as much as possible about Ukraine. “Bohdan Stupka is a great actor of our time who has done so much for each and every one of us. He created characters that helped many to comprehend Ukraine’s history and present, its unique identity and its controversies, its triumphs and tragedies” said Mr. Firtash. “Stupka is known and dearly loved all across Ukraine and far beyond. He is a Ukrainian of a global scale!”