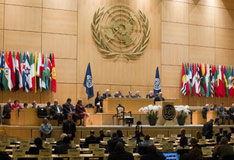 12 June 2012 Federation of Employers of Ukraine

International Organization of Employers Welcomes Ukraine To Its Family

As part of his agenda of participation in the 101st Session of the International Labor Organization in Geneva, Mr. Dmitry Firtash, President of the Federation of Employers of Ukraine met with Mr. Daniel Funes de Rioja, the IOE’s Executive Vice-President, and with Mr. Brent Wilton, IOE’s General Secretary. Welcoming the Ukrainian guest, Mr. de Rioja expressed his profound satisfaction with the state of IOE-Ukraine cooperation.

“Today our organization has become a global net uniting more than 160 member-states. Clearly, the more active the interaction between national employers’ federations with the IOE becomes, the richer is the bank of precious experience and the more opportunities there are for all interested parties to make the best use of it. We are pleased that Ukraine, having successfully completed the unification of the Federation and attributing real value to its operation, has been making its important contribution into this bank,” stressed the Executive Vice-President.

In response, Dmitry Firtash described to his vis-à-vis the FEU’s achievements over the 7 months of the Federation’s operation following the unification congress.  He laid a particular emphasis on an impressive progress in rolling out interaction between the social dialog parties and with key governmental agencies whose decisions shape up the business environment in Ukraine. The IOE senior officials perceived Mr. Firtash’s information about the elevation of the employers’ influence and role in defining the national economic regulation policy with great interest.

“Today, the government of Ukraine, the employers and unions have been working as a team without segregating problems into “our” and “somebody else’s” ones,” told the FEU President. “We managed to do away with the past practice of the government’s autonomous approval of decisions unilaterally without account for businesses’ needs. This, at the end of the day, tremendously contributed into reducing social risks in Ukraine.”

In conclusion Mr. Firtash stressed that the FEU lays very high expectations on intensifying cooperation with such a reputed global organization as the IOE. “We are faced with a multitude of massive challenges, and experiences of different countries would have been a very valuable tool in addressing them,” said Mr. Firtash. “This being said, it would be our honor and privilege to invite you as high-ranking representatives of the IOE to attend our Federation’s next congress and to discuss the content of technical and advisory assistance that the IOE might provide us in our efforts,” suggested Dmitry Firtash.

Thanking the guest for the invitation, Daniel Funes and Rioja and Brent Wilton assured him that they would use the best of their efforts to engage the IOE’s expertise to work along the lines which the FEU will identify as priorities in cooperation with the IOE.