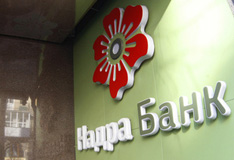 In June, the retail clients of Nadra Bank deposited about UAH 1 billion with the bank. Bank’s specialists note that Ukrainians make on the average more than 800 deposits daily for the amount exceeding UAH 53 million.

"We’ve been observing the tendency toward the growth of deposit portfolio since the middle of spring. But drastic positive changes in the flow of household deposits took place at the end of May", noted Sergei Kozlov, Nadra Bank’s Retail Business Director.

Also according to the bank, in June the amount of daily deposits placed by Ukrainians was 1,5 times higher than that in May 2014.

“All this demonstrates the fact that our citizens’ confidence with the banking system grows steadily. After the early year anxiety the depositors are getting on to the fact that keeping money home is simply gainless and insecure. Besides, today Nadra Bank offers one of the most attractive deposit conditions", said Sergei Kozlov.

In particular, the depositors favor most the offer titled "Golden interest" which implies the 3-month deposit at 24% per annum in the national currency; 12% – in USD, and 11% – in Euro. Within the framework of this campaign, each client formalizing the deposit automatically becomes the participant of the drawing with gold bars as the prize. Two clients have already got the precious metal bars, while the next winner will be announced in mid-July.

Nadra Bank launches a program of loans restructuring titled "Defender of the Fatherland" for debtors mobilized for serving in the Armed Forces of Ukraine. Starting from the day of calling up to military service and during the whole period of military service, the financial institution won’t accrue the interests and monthly fees for using the loan to persons subjected to military service and to reservists, having a loan in the bank.

Repayment holidays are provided to the private persons, entrepreneurs, who are using the following types of financing in national currency, US dollars or euro: blank loans, overdrafts, credit cards, consumer secured loans, car loans, mortgage loans and others.

"It is the first time in the history of independent Ukraine we faced the situation, when everyone should bindingly come down to the point of handling the crisis in the country. Financial institutions may not and should not stay apart from these problems”, said Dmitriy Zinkov, Chairman of the Board of Nadra Bank. He also added that it was the duty of Nadra Bank, as one of the biggest financial institutions in the country, to give a support to those, who defended the territorial integrity of our country, and who put their lives on the line to return peace to our country.