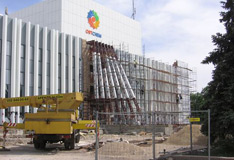 In 2012, the enterprises of the Firtash Group of companies Group DF spent about UAH 500 million on social and ecological projects. Almost all the companies Mr. Firtash, the Chairman of the Group DF Supervisory Council, invests in are cities’ principal employers or generate lion’s shares of municipal budgets in cities and towns they are based in.

The total of about 1 million Ukrainians are beneficiaries of social projects run by Mr. Firtash’s companies in the cities housing them.

To find out more about social responsibility of the Firtash Group of companies Group DF, please, visit “Preserve Your City”  and Facebook page