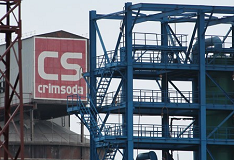 In particular, in 2013, Crimean Soda Plant invested UAH 90 million in construction of a cogeneration unit for production of electric and heat energy from natural gas. The company expects return of investment in this project in 4 years. “Implementation of this project will allow Crimean Soda produce 90% of its total demand for electricity, as well as reducing natural gas consumption by 11%,” reported Dmytro Nechytailo, Head of Non-Core Business Department of Group DF.

Also, in 2013, Crimean Soda Plant invested over UAH 5 million in opening of the Northern Baksan deposit. The total investment into the project reached UAH 200 million. It is aimed at providing the company with its own raw material, the limestone, which is used in soda production.

“Our own raw material base is a good competitive advantage, which will enable Crimean Soda Plant to reduce soda ash production cost by 10-15%,” stated Dmytro Nechytailo. “Secondly, the enterprise in the future will be able to become a major trader on the limestone market. Though the present capacities of the deposit allow for extraction of nearly 0.9 million tons of limestone a year, eventually we plan to increase extraction to 2.2 million tons.”

Besides, in 2013, Crimean Soda Plant became the sole manufacturer of baking soda in Ukraine. Over UAH 30 million were invested to restore baking soda production in Ukraine in 2013.

“The launch of baking soda production is a landmark project of the national scale, because over the recent four years Ukraine has been forced to import this product due to stop of production in Ukraine,” noted Vladyslav Shmelkov, Chairman of the Board of Crimean Soda Plant.
Also according to him, in two years the enterprise plans to increase production capacities from the current 20 to 48 thousand tons of baking soda per year.
“Since Ukraine annually consumes about 25 thousand tons of baking soda, with the increase of production we intend to export part of it”, stressed Vladyslav Shmelkov.

Moreover, in 2013, Crimean Soda Plant invested about UAH 23 million in the overhaul and maintenance of its operating equipment, constructions and facilities.

Group DF is a diversified international group of companies, operating in 11 countries across Europe and Asia. Our core areas of operations are fertilizer and titanium businesses, gas distribution and banking. The Group is one of the leading chemical industry investors in Eastern Europe. Group DF implements international standards of corporate governance seeking to be transparent and understandable for financial institutions and markets. The total number of employees in enterprises of Group DF exceeds 100 thousand The founder and owner of Group DF is Ukrainian businessman Dmitry Firtash.

PJSC “Crimean Soda Plant” (Krasnoperekopsk, ARC) is the largest producer of soda ash and baking soda in Ukraine, as well as one of the largest in Eastern Europe. The enterprise occupies about 80% of the Ukrainian market of soda ash and more than 2% of the world market. In addition, the plant  is one of the largest producers of edible salt. Since 2004, “Crimean Soda Plant” has been part of the international group of companies Group DF.