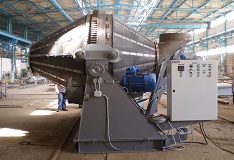 The company has invested UAH 19.5 million in the project to build a special factory set for titanium sponge blending. The factory set will allow processing raw materials into commercial batches of higher quality required by companies of the aerospace industry. By the end of this year, the updated equipment will be started up.

According to Dmitry Firtash, the ZTMC chief investor, today Ukraine has a weak position in aerospace markets, but this project execution would allow Ukraine substantially strengthen its positions in the titanium products market.

"We are a large country with a huge potential in the titanium market. Aerospace industry goes ahead. I am confident that titanium is the future. And I am sure that in the near future there will be a deficit of titanium products. Now there are 4 participants competing for the market: China, Russia, Kazakhstan, and the United States. But we are not presented there! Ukraine could take the second place in this market”, said Dmitry Firtash in the interview earlier.

“By increasing the technical level of production and transition to the commercial batches manufacturing used in the aerospace sector and mechanical engineering, we are trying to reach new growing high-margin markets of aerospace products, where  ZTMC has never been presented”, Volodymyr Sivak, Director of ZTMC commented.

The project for construction of the factory set for titanium sponge blending was developed in May 2015 and works on the facility construction began in June, 2015. The project is based on the solution successfully working in the Kazakh Ust-Kamenogorsk Titanium Magnesium Plant.

According to the business plan, start-up operations and production chain installation have to start this November.

According to Group DF estimates, the global market consumes 160-170 thousand tons of titanium sponge per year and is estimated at USD 1.5-2 billion. Aerospace and other industries consume about 80-87% of the world's sponge. Aerospace (excluding military industry) consumes 50 to 60 thousand tons per year with an average annual growth rate of 5-6%.

Zaporizhzhia Titanium and Magnesium Combine LLC is the only manufacturer of titanium sponge in Ukraine and Europe. ZTMC was established in accordance with the resolution of the Cabinet of Ministers of Ukraine №955 dated October 3, 2012 to attract investment in the company.

At the end of 2012, the company Toleksis Trading Limited, a member of Group DF, won the competition for the selection of non-state actors at Zaporizhzhia Titanium and Magnesium Combine LLC, and in 2013 received a 49% stake in the company. According to the agreement with the State Property Fund, the Toleksis Trading Limited company was obliged to invest USD 110 million in the implementation of several investment projects at the enterprise. At the moment, the investor has fully fulfilled its obligations under the contract – made a 100% contribution to the share capital and additional capital amounting to a total of USD 110.0 million. Thus, ZTMC has the financial support for implementation of the plans related to the plant reconstruction.

Group DF is a diversified international group of companies, operating in a number of countries across Europe and Asia. Our core areas of operations are the fertilizer and titanium businesses and gas distribution. Other Group businesses include agribusiness, media, soda ash production and real estate. Today, Group DF is actively expanding into new business areas. Currently, it is one of the leading chemical industry investors in Eastern Europe. The Corporate Centre of Group DF, Group DF International, was established to increase the shareholder value of the Group and its businesses. The Corporate Centre develops and approves the overall strategy and various areas of expansion of the Group and its businesses, drafting and providing the rationale behind strategic and investment decisions for the businesses and the Group. The Corporate Centre helps the Group’s businesses to achieve their strategic objectives and improve efficiency. It also takes the lead in carrying out M&A, attracting capital and developing cross-sector synergies. The founder of Group DF is Dmitry Firtash, a prominent Ukrainian businessman, philanthropist and investor.