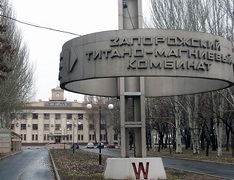 Group DF and the State Property Fund of Ukraine have completed the process of establishment of Zaporozhye Titanium and Magnesium Combine Limited Liability Company.

In December 2012, Tolexis Trading Limited, part of Group DF, won the tender held by the State Property Fund of Ukraine (SPFU) to select private shareholders in Zaporozhye Titanium and Magnesium Combine LLC (ZTMC LLC), which is being established pursuant of the Resolution No.955 adopted by the Cabinet of Ministers of Ukraine on 3 October 2012 with the purpose of attracting investments into the company.

Establishment of ZTMC LLC was preceded with re-evaluation of the assets of Zaporozhye Titanium and Magnesium Combine State Enterprise (ZTMC SE), which was held in the summer of 2013 and amounted to UAH 749.164 million. It was also preceded with re-signing of the agreement between the SPFU and Tolexis Trading Ltd regulating the establishment of ZTMC LLC.

“We are pleased that the process of establishment of ZTMC LLC has finally been completed,” announced CEO of Group DF Boris Krasnyansky. “We have large scale plans for complete reconstruction and expansion of production capacities of ZTMC, which will result in the company producing high quality and added value products demanded on the global markets. By becoming the shareholder of ZTMC, we are now able to start implementation of these plans.”

The modernisation programme for ZTMC includes stage-by-stage investments in construction of new facilities for the production of titanium sponge and slag, as well as developing the production of titanium ingots and alloys – the highest added value products. “This programme provides for a number of possible scenarios depending on various factors, including conditions on the global markets,” explained Boris Krasnyansky. “According to the most favourable scenario, Group DF’s investments in ZTMC may reach USD 700 million. In fact, this will mean construction of a brand new and technologically advanced industrial company.”

Group DF also plans to develop production of ingots from titanium and its alloys with other metals – the highest added value products, which will enable Ukraine to enter global high-tech markets, such as aerospace industry. It is planned, that the capacity of this production on the first stage will be 1,000 tons of ingots per year, with the prospect of future increase to 12,000 tons per year.

Investments into ZTMC are a part of Group DF’s strategy of creating a vertically-integrated titanium holding comprising assets in titanium mining and enrichment, as well as in titanium metals and chemicals production.

Zaporozhye Titanium and Magnesium Combine is the only producer of titanium sponge in Ukraine and Europe. With the initial capacity of 20,000 tons, the company now produces no more than 10,000 tons of titanium sponge per year. This happened because ZTMC’s production facilities are outdated and worn-out, and also because of energy inefficiency, with electricity costs reaching 40% of the total production costs.
Group DF is a diversified international group of companies, operating in a number of countries across Europe and Asia. Our core areas of operations are fertilizer and titanium businesses, gas distribution and banking. Other businesses of the Group currently include agribusiness, media business, soda ash production, energy infrastructure development and real estate.