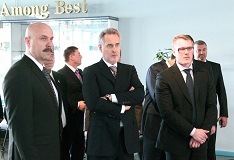 The decision to the effect of suspension of operation of Gorlovka’s STIROL Concern and Severodonetsk AZOT was made for security reasons, as Mr. Dmitry Firtash, Head of the Board of Group DF, explained in his interview to Inter TV channel.

He also said that this decision was made following a series of alerting events. In particular, STIROL’s security officers apprehended persons who had been taking pictures of ammonia production facilities. These persons were turned in to the police but were later released from custody. In addition to that, unidentified persons had stolen 1.5 tons of explosives at one of the East-Ukrainian enterprises. Earlier, a shot down helicopter collapsed in dangerous proximity to Severodonetsk AZOT.

“That’s why I made the decision. It has nothing to do with politics, it’s a purely security-driven decision. Because we do understand what may happen if, God forbid, the plant is blown up or something like that takes place. You will appreciate the scale of the catastrophe,” commented Mr. Firtash.

“I did make the decision personally,” he further added pointing out that prices to fertilizers are on the rise these days. “Obviously, looking at it from a commercial perspective, halting the production is bad for business. Once again, it doesn’t make sense economically but looking at it from the national standpoint, I’m sure we do things right,” said Mr. Firtash.

“We were operative when prices were down while today, when prices are on the rise, we have to halt. However, we will be paying wages as we always do notwithstanding what’s going on. We aren’t going to lay anyone off, no shorter working hours or weeks are planned,” assured Mr. Firtash.

Group DF owner remarked that he is responsible for 110 thousand people employed by his enterprises. “I am responsible for these people’s being paid, being able to work so that I can earn as well, for having everything up and running.”

He also pointed out that staying in Vienna he can meet his subordinates and look into all aspects of his business operation.” I have phones, my subordinates, my friends come visit me, I have a lot of communication, my heart beats with Ukraine. This is not just words, it is about my lifetime investment. And I do have to care about what’s going on in Ukraine.”