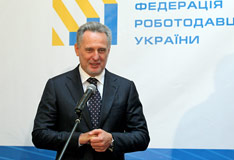 26 September 2012 Federation of Employers of Ukraine. Promotion of Enterprise

Mr. Dmitry Firtash, President of the Federation of Employers of Ukraine has announced that the FEU has launched an effort towards compiling a national registry of inspecting authorities. A decision to this effect was approved at the Federation’s Board meeting on September 26. The would-be document will provide a good deal of certainty in the vital question about what officials and to what extent may inspect companies’ operation.
According to Mr. Firtash, neither entrepreneurs nor civil servants today have clear understanding of how many inspecting agencies may audit companies, who is there to define the scope of their powers and responsibilities, how long an inspection may last and what sanctions may apply to detected infringements.
“We have to put together a full list of multiple services, inspectorates, administrations, departments, officials authorized to come to an enterprise and start auditing it,” suggested Mr. Firtash.
The FEU President argues that it is exactly because of absence of a systematized registry that from 40 to 95 auditors from different agencies at a time may arrive at a company to perform their checks. “We have to be clear on the situation, we have to see where the powers duplicate, what atavistic practices remain in place, etc. With that kind of understanding, we can have strong arguments in lobbying the reduction of the controlling pressure,” said Mr. Firtash.
For the time being, all corporate monitoring and inspection procedures are regulated by the 2007 Law of Ukraine On Fundamentals of State Monitoring of Economic Activities. The FEU suggests that provisions of this Law are no longer relevant as the number of checks not covered by it has grown 2.5 times in the past 5 years reaching the total of 20. Regulations of inspections performed by the majority of governmental agencies are spelled out in institutional documents instead of being stipulated in the laws.
According to the International Finance Corporation’s assessment, checks and audits were performed at 74 % of Ukrainian companies in 2010 while the losses incurred by these companies in connection with such inspections exceeded 3.2 bn hryvnias.
In this connection, the FEU finds it vital that a comprehensive registry covering the entirety of controlling agencies be drawn up in order to eventually proceed to the checks reduction effort. Dmitry Firtash also explained that the FEU has been maintaining an ongoing dialog with the Cabinet of Ministers to the end of such a reduction. “Our goal is to come to terms with the government about the maximum possible reduction of checks and controllers, and on putting in place a single inspections procedure,” said the FEU President. Should this goal be attained, Ukraine will become better understood for foreign investors and companies willing to do business here, stressed Mr. Firtash.