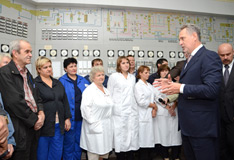 Gorlovka and Severodonetsk will become testing grounds for an experimental program providing for preferential lending to employees of two chemical enterprises looking to acquire housing. The loans will be provided against a 6 percent per annum interest rate. A decision to this end was made by Mr. Dmitry Firtash, Head of the Board of Directors of Group DF after meeting with employees of STIROL Concern (Gorlovka of Donetsk region) and Severodonetsk Azot (Severodonetsk, Lugansk region) owned by him.

According to the businessman, loans to employees of these two companies will be issued with five to seven years repayment period. Shortly, an examination of wishes of employees in need of their living conditions improvement will be completed which will be followed by an assessment of funds required for the preferential lending program launch.

“We intend to issue preferential mortgages against six percent a year. These loans may be offered by Nadra Bank. By this token, we will be able to help our employees address their housing problems,” said Mr. Firtash. He further explained that employees will greatly benefit from this proposition as these days Ukrainian banks offer loans in hryvnia against 25-30 percent per annum.

According to Mr. Firtash, loans in the national currency will allow minimizing inflation and exchange risks.