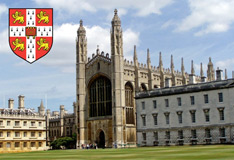 The University of Cambridge is delighted to announce that Mr Dmitry Firtash has been nominated to receive the Chancellor’s 800th Anniversary Campaign Medal for Outstanding Philanthropy, which will be presented at an exclusive ceremony in Cambridge in October 2012 by the Vice-Chancellor Professor Sir Leszek Borysiewicz.

The Chancellor’s 800th Anniversary Medal for Outstanding Philanthropy is a prestigious, limited edition medal commissioned by the University of Cambridge.  It is awarded to the most generous benefactors of the University and its Colleges:  those philanthropists who are members of the Guild of Cambridge Benefactors and who have made an irrevocable pledge of £5 million or more during the Cambridge 800th Anniversary Campaign.

The medals have been designed and executed by Jane McAdam Freud who is a graduate of the Royal College of Art in London and a Fellow of the Royal Society of British Sculptors.  Jane was granted Freedom of the City of London in 1990 on merit for her art works.  Each medal contains almost 500 grams of sterling silver and is individually numbered.

To date 26 medals have been awarded to Companions of the Guild of Cambridge Benefactors: to individual philanthropists, organisations, trusts and foundations both in the UK and overseas, and the University is delighted to be able to recognise Mr Firtash’s most generous support for Ukrainian Studies and Cambridge Enterprise by presenting this unique piece of artwork.