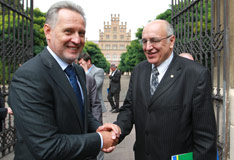 The President of the Federation of Employers of Ukraine and Head of the Board of Director of Group DF Mr. Firtash announced his plans at the meeting of the Council for Entrepreneurship Development and Investment Promotion in Chernivtsi region. The meeting took place in the Academic Council hall of one of the most beautiful and prestigious universities in Ukraine - Chernivtsi National University.

"I am very pleased that this meeting of the Council for Entrepreneurship Development and Investment Promotion in Chernivtsi region takes place in this beautiful hall. However, I know that this building needs major repairs. So I made a decision to donate UAH 8 million to the University for necessary works to be continued," said Mr. Dmitry Firtash.

This is not the first charity support that Mr. Firtash provides to the region. He regularly donates funds to support the regional theater, Philharmonic and Art Museum in Chernivtsi; twice Group DF has become the general partner of Chernivtsi international poetry festival MERIDIAN CZERNOWITZ.

"I feel good when I come here in Chernivtsi; this is another opportunity to come home. I love the city, I like people, culture and traditions of this region", - says Mr. Dmitry Firtash.

The architectural ensemble of the former residences of the Orthodox Bukovina and Dalmatia Metropolitans was built on the site of the old bishop's house in 1864-1882. This year the complex was included in the UNESCO World Heritage List. This architectural monument is one of the most important sites of Bukovina and Ukraine in general. The assistance donated by Mr. Firtash will be channeled to the reconstruction of this historic building.

The Metropolitan Residence’s architectural ensemble was designed and constructed by Josef Hlavka, a famous Czech architect, scientist, and a patron of art.

He designed the unconventional for that times complex of buildings of eclectic style with a predominance of Byzantine and Romanesque styles elements. This project repeatedly won prizes in competitions of known architects and was particularly marked at the World Exhibition in Paris (1900). The composition of the ensemble is quite complicated, but it has accurate planning. It consists of three monumental buildings: the main one, the seminary with Church of the Three Hierarchs, and presbytery.

The main building (now the central building V, which houses the University administration and the foreign languages department) was the abode of the Metropolitan with spacious apartments, luxurious rooms for audiences and diocesan meetings. In the corner of the building’s left wing there is a Hierarch Home Church - Ivan Suchavskiy’s chapel, which, in fact, was a start of the entire residence construction.

Numerous halls of the central building amaze with magnificence typical to the supreme religious ranks. Some of them have retained their original appearance being comparable with the best ceremonial halls of Europe.

Juriy Fedkovich Chernivtsi National University was founded on October 4, 1875 by the decree of the Emperor of Austria-Hungary Franz Joseph on the basis of theological institute which had existed since 1827.