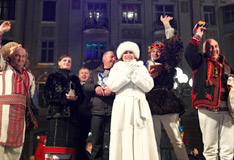 On January 15, 2013 Chernivtsi hosted the folklore and ethnographic festival ‘Malanka-fest 2013’ sponsored by the Firtash Foundation charity. The prize fund of the festival totaled in 200 thousand UAH.

“Malanka is an extraordinary and colorful feast,” says Dmitry Firtash, the founder of the Firtash Foundation providing funding to the festival organization this year. “We do hope that this event will help preserve the Ukrainian popular traditions and transfer them over to the future generations,” stressed Dmitry Firtash.
The total of 32 troupes counting over 1000 performers from different towns and villages took part in the festival. “On behalf of Dmitry Firtash, I am delighted to support the wonderful traditions of Bukovyna. It is a very significant festival, a huge feast, lots of positive emotions,” welcomed the performers Mrs. Lada Firtash, Dmitry Firtash’s wife and the Firtash Foundation Custodian.

The ethnic festival protagonists included both the traditional folklore characters like Malanka, Vasyl, bears, goats, gypsies, and heroes of modern times movies and animation like “D’Artagnan and the Three Musketeers”, “The Captive of the Caucasus”, “Asterix and Obelix” and many others. The costumed carnival started at noon, marched through the city downtown and wound up in a massive gala-performance at the Philharmonics square.

A Malanka troupe from the town of Vashkivtsi winning the 2013 Festival received 50 thousand UAH worth of the grand prix. The bands from Krasnoilsk (being the most numerous team at the festival) and from the village of Horbovo ended up the second and the third in the competition winning 30 thousand and 20 thousand UAH respectively.
Each troupe received the festival mementos – certificates of participation and 4 thousand UAH in cash to cover their transportation costs as most of the contestants had arrived in Chernivtsi from distant municipalities. “It is important that all contestants, not only festival winners, receive due support. Each troupe made a unique contribution into making the feast happen and no one may be left unnoticed. We appreciate each and every participant’s and guest’s effort and thank them for this fantastic aura,” said Mrs. Lada Firtash.

The Firtash Foundation is a private charity founded by Dmitry and Lada Firtash. Its major objective is the provision of systemic and long-term support to education and culture in Ukraine, elevation of creative and intellectual potential of the Ukrainian youth.
The Foundation pursues the following priorities:
• support to gifted and committed young Ukrainians pursuing an active life stance;
• promotion of the Ukrainian language, history and culture learning and studies in Western Europe;
• support to the Ukrainian culture, preservation and rebirth of the national culture and spiritual heritage.
The Malanka festival is the most joyful feast in the year featuring lots of music, dances, dramatized performances and carnivals, nice costumes all permeated by the Ukrainian traditional flavor. For centuries, this has been the most beloved massive folk festival for hundreds of neighborhoods, especially in Bukovyna and Bessarabia.
Malanka-fest is traditionally celebrated across Ukraine on January 13-14 (old-style Orthodox New Year), while most colorful events take place in Chernivtsi, Ternopil, Ivano-Frankivsk, Khmelnytsky and other Western regions. Afterwards, on January 15, the amateur troupes flock in Chernivtsi to select the best of the best in a fun competition. Representatives of different regions highlight their unique local traditions reflected in their costumes, songs and theatrical performances.