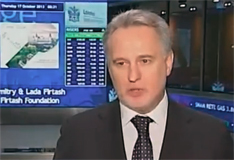 The London Stock Exchange was opened by the Ukrainian delegation headed by the businessman and philanthropist Dmitry Firtash. Today, the Chairman of the Group DF Supervisory Council Dmitry Firtash and his wife, the Chairperson of FIRTASH Foundation Lada Firtash opened the financial day of Europe at 8:00.

The opening of the trading is a part of the event ‘Days of Ukraine in the United Kingdom’, organized in London from 17 to 19 October 2013 by FIRTASH FOUNDATION, a Ukrainian private charitable foundation created by Dmitry and Lada Firtash.

The owner of Group DF stressed that the Days of Ukraine in the UK was the first large-scale international event that would show Ukraine in a new light, broadening what Britons know about our country, and giving new impulse to Ukrainian-British relations.

“It is very important that we begin the Days of Ukraine in the United Kingdom at the London Stock Exchange. London is the financial capital of Europe; it is a huge investment potential for our country. What we are doing today is very important for Ukraine; unfortunately, we are little known in the world and our task is to show the potential of our country”, said Dmitry Firtash.

The London Stock Exchange is one of the largest and oldest exchanges in Europe. This invitation is a traditional way of showing respect to the invited person on the part of the management of the Exchange.