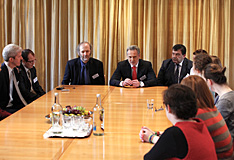 On his trip to London where the Guild of Benefactors of Cambridge University was hosting its annual reception, Mr. Dmitry Firtash paid a visit to the Slavonic Studies Department of Cambridge University. Using this opportunity, the faculty had organized a meeting inviting international Ukrainian studies program participants to converse with the person who made it possible for this program to be launched at the world’s most prestigious university. The introductory speech made by Prof. Rory Finnin, Head of the Cambridge Ukrainian Studies Program, was quite laconic – everyone was very keen to spend as much as possible time talking to Mr. Firtash. The students’ questions dealt with the entrepreneur’s personal success story, his motivation for founding the Ukrainian Studies Program, plans for the future but one common theme skewing all the interventions was the word of gratitude for Mr. Firtash’s contribution in this important endeavor. Many young people said that they were willing to commit their future academic or practical research to the Ukrainian philology or to studying Ukraine’s cultural heritage. Even though the students are just the second-year Ukrainian language learners, their tutor Prof. Finnin’s worries were assuaged: the students brilliantly passed this informal communication skills test.

This meeting was followed by a luncheon to which Cambridge Ukrainian studentship fellows were invited. This program is also being funded by Dmitry Firtash. The exchange at the table was very open, sincere and cordial. Anna Grebennikova, majoring in sociology at Cambridge in the studentships program framework, described her impressions from meeting with Mr. Firtash: “Back in 2011, as soon as I learned about the studentships offered by FIRTASH Foundation, I wanted to ask Mr. Firtash: you are offering such a great deal of liberty involved in the program – how come you require nothing in exchange (the way other similar programs work)? The conditions were just excellent while qualification criteria were so mild that my doubts, astonishment and suspicions were only natural: it can’t last too long, this freedom must end at some point! For this reason, I was looking forward to an opportunity to ask Dmitry Firtash these questions directly and to receive an answer right there, without intermediaries and assistants. I was really happy that it all happened during the luncheon, in a narrow circle of close associates and the program fellows, in a very informal setting. Dmitry Firtash said that imposing obligations was not his intention: what he is aspiring to is raising the Ukrainian elite able to speak same language with the rest of the world, overcoming narrow-mindedness. This is the answer that will make me ponder on it over and over again.”

In the evening of that day, Mr. Firtash was a guest at the reception hosted by the Guild of Benefactors of the University of Cambridge of which he is a member. These receptions are traditionally organized at the end of the year but this one was a special occasion: as it was announced, the total of charity donations to the University over the Program existence has surpassed US$2 billion. Celebrating this accomplishment, Prof. Sir Leszek Borysiewicz, the Vice-Chancellor of the University, said: “This is a remarkable achievement. The University and the Colleges are immensely grateful to all our donors who have given to this Campaign so generously.”