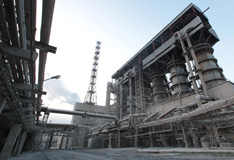 Speaking in the city of Sumy, Mr. Firtash, Head of the Board of Directors of Group DF argued that in the ten years to come, Ukraine faces good chances to triple its chemical production outputs.

“All prerequisites for such a breakthrough are there: the growth rates of Ukraine’s chemical sector exceed those of the national GDP, while the domestic industry is growing faster than the global chemical sector at large,” said Mr. Firtash. He further added that during the future five years, an average annual growth rate of the world’s chemical industry is projected to reach some 2.5 percent while the growth rate of Ukraine’s chemical output in 2011 was recorded at a 19-percent level. “The chemical sector of Ukraine is recovering after the crisis and is gaining serious momentum. The right strategy will make it possible for Ukraine to join the top rating of chemical producers on the planet,” maintains he. Mr. Firtash also believes that the past five years have not witnessed a major change in Ukraine’s share in the global chemical production breakdown but some sub-sectors have already leaped forward into leadership positions. “For example, in ammonia production, Ukraine accounts for about a 2.5 % share,” cited Mr. Firtash. Besides fertilizers production, Ukraine should focus on titanium dioxide production and petrochemical development, laying emphasis on higher added-value products in principle, Group DF’s Head says.

According to Mr. Firtash, the next 20 years are expected to see the global market growth to the level of $5.2 trillion. India and China featuring the fastest growth rates are projected to lead the market. “Asian countries are controlling 40 % of the world’s chemical market. They are looking to acquire more and more European companies to gain access to technologies and customers. The situation is quite tense indeed, the competition is very stiff. Given the circumstances, it is very important for Ukraine to what niche should be sought and where. We need to have a clear understanding of how the country’s positions may be enhanced internationally,” stressed Mr. Firtash.