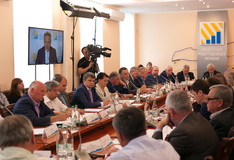 24 June 2014 Federation of Employers of Ukraine. Development of Ukraine

Entrepreneurs and experts from the Federation of Employers of Ukraine will offer a plan to stabilize the economic situation in our country to the President, Government and Parliament of Ukraine. This was stated by the FEU President Dmitry Firtash during the meeting of the Federation Board.

Among the necessary measures to stabilize the economy employers consider an introduction of a moratorium on the use of sanctions against businesses for the time of combat operations in the East, elimination of corruption, as well as support for small and medium businesses. In addition, the FEU offers public authorities to maintain foreign markets and decentralize the financial system.

"Today business needs to back the state," said Dmitry Firtash. According to the FEU President, acting together business and government officials will be able to pull out of a deep crisis.

Dmitry Firtash also noted that not all businesses in the East could pay salaries, taxes, and this was a cause for a criminal case opening against directors.

"We may face a situation when East companies’ management will massively fall under criminal proceedings simply because of delays in financial transactions and settlements with contractors. This also applies to the timely payment of taxes. State cannot expect business to perform all obligations, it cannot be pressured by checks, fines, penalties, criminal proceedings until stable operating conditions are provided”, said Dmitry Firtash.

The FEU President noted that according to the estimates of regional employers' organizations, in the East many businesses have stopped operations, freight traffic decreased by 50%, turnover of small and medium businesses declined by 80%. Dmitry Firtash called managers and owners of businesses to do everything possible to preserve jobs in the current environment.

"Today, small businesses almost have stopped. They do not have so large margin as big business. For us it is very important to support them. First of all, we should talk about access of Ukrainian small and medium business to the government procurement," said Dmitry Firtash. According him, Ukraine could use the experience of other countries and to allocate quota for small businesses on supply of goods for state funds.

"We estimated the share of small and medium-sized businesses in the structure of public procurement at 50 percent. It is necessary to make these provisions in the legislation," said Dmitry Firtash.
The third necessary step, according to Dmitry Firtash, is to reform regulatory bodies and eliminate corruption schemes.

"Annually Ukraine is losing to 200 billion hryvnia because of officials’ corruption schemes. According to our estimates, the elimination of these schemes will increase the economy by 6% of GDP and will create about 200,000 new jobs. According to the FEU, the most corrupt areas are public procurement, tax and customs authorities," said Dmitry Firtash.

The Head of Ukrainian employers also noted that the fourth necessary step was the beginning of negotiations on access of Ukrainian goods to the markets of the European Union and the Eurasian Economic Union. According to Dmitry Firtash, since the early days of the agreement on association the Ukrainian business should use all the tools to gain access to the European market.

On the other hand, Ukraine should not lose the market of Russia, Belarus and Kazakhstan, where it exports goods for nearly 20 billion dollars annually. "Therefore, – says Dmitry Firtash, – Ukrainian employers need to initiate a working group with the participation of business associations in Europe (BusinessEurope) and Russia (RSPP) for the most rapid adaptation of the economy of Ukraine to the EU and the Eurasian Economic Union markets”.

"Ultimately, business in Ukraine, in the EU and Russia should be the main lobbyist of the tripartite agreement between the EU, the EEU and Ukraine on the establishment of the Free Trade Zone is signed for the next 5 years. Thus, we would create a common market with a population of 715 million people", summed Dmitry Firtash.