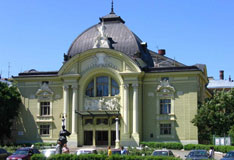 Mikhail Papiev, Governor of Chernivtsi region, handed the payment certificate with the value of 500 thousand UAH to the theater. The funds will be used to improve and renovate the material and technical resources of one of Ukraine’s oldest theaters.

According to Mr. Yuriy Marchak, the Theater’s CEO, the philanthropic donation will allow renovating the veil and curtains, and reconstructing the stage. Mr. Marchak also commented that the redecoration works are quite capital- and labor-intensive: the stage curtain alone requiring 230 meters of velvet will cost the theater 56 thousand hryvnias.

Celebrating its 80th anniversary this year, the theater keeps exciting its loyal spectators with a variety of premieres. As part of the jubilee celebration, the troupe offered its guests a sequence of prime nights: a German-language play “I Eat the Skies” on the 5th of November, a gala-performance “The Theater The Life” on the 6th, and a play “A Thousand Sheaves of Wind” staged on the 7th.

Chernivtsi Olga Kobylianska Regional Ukrainian Musical and Drama theater is Based in a building designed by Viennese architects Helmer and Felner.

Over the history of its existence, the theater has staged over 500 plays and shows written by Ukrainian and international authors.