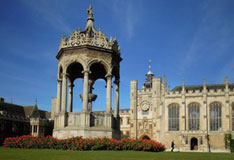 Cambridge University’s Ukrainian Studies Program has been attended by students from many countries of the world which attests to the high interest in Ukraine, said Mr. Dmitry Firtash, Head of the Board of Directors of Group DF in his interview to Den daily.

‘About 50 international students study the Ukrainian culture and language [at Cambridge]: Americans, English, Germans, Chinese… Can you believe it how Ukraine is interesting?” commented Mr. Firtash.

Notably, the philanthropist as a proud Ukrainian thinks it is very important that the world learn as much as possible about Ukraine – a country with a millennium-long history and richest cultural heritage.

Mr. Firtash told that the University, at least twice a month, runs a variety of events related to Ukraine. ‘This is Ukraine’s unofficial embassy at the University rated the best in the world,’ stressed he.

Dmitry Firtash further described his first visit to Cambridge six years ago when he found out that the University was running multiple national programs while the Ukrainian was missing. ‘It barbed me. And I used every effort to make sure that the Ukrainian language and the Ukrainian culture become part of the Cambridge studies,’ recalls the entrepreneur.

Dmitry Firtash Charity Activity at Cambridge University
Dmitry Firtash has been financing Cambridge-Ukraine Studentships and Cambridge Ukrainian Studies programs. In March 2011, Mr. Firtash became the first Ukrainian ever to be admitted to the Guild of benefactors of the University of Cambridge whose membership includes donors and philanthropists having made remarkable contributions into the University’s academic, social and cultural development.