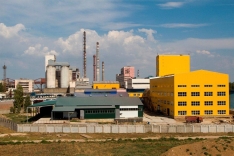 This project will see an overhaul of the city gas network, as well as construction of 18 boiler stations. This project is part of the Memorandum for Cooperation and Social Partnership signed earlier with the city of Krasnoperekopsk, which continues to be implemented.

In 2014, Crimean Soda Plant will allocate a combined UAH 20 million to implement this energy efficiency project in Krasnoperekopsk.

“Thanks to this project, all kindergartens and schools of the city, as well as the local hospital, will enjoy their own heating and hot water supplies. The residents of Krasnoperekopsk will now be able to switch to independent heating, which will help reduce their energy expenses,” explained the Mayor of Krasnoperekopsk Taras Filipchuk.

The Memorandum for Cooperation and Social Partnership was signed by the city authorities, Crimean Soda Plant JSC, and the owner of the company and Chairman of the Group DF Supervisory Council Dmitry Firtash.

The company provides systematic support to Krasnoperekopsk by implementing various projects aimed at improving the quality of life for the city residents. Thanks to Crimean Soda Plant, the residents of Krasnoperekopsk pay only half of their water supply costs. The other half is compensated by the company, according to the initiative of Dmitry Firtash, the owner of Crimean Soda Plant.