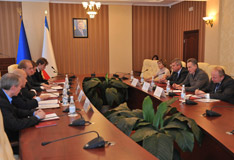 Dmitry Firtash, Head of the Joint Employers Movement of Ukraine and Head of the Board of Directors or Group DF, is investing more than 200 million hryvnias in the development of a Crimean city of Armiansk housing Krymskiy TITAN plant. This pledge Mr. Firtash announced after meeting with Mr. Pavel Burlakov, the first Vice-Chairman of the Council of Ministers of Crimea.

“Today we have reviewed four projects aimed at Armiansk social infrastructure improvement. The first one is water supply as the city’s water piping requires 100 percent replacement. The second project is sewage. Also, we will finance schools and kindergartens remodeling works. The last project is buildings roofs and elevators repairs. The total budget of social projects exceeds 200 million hryvnias,” stressed the entrepreneur.

While summarizing the meeting’s outcomes, Mr. Firtash noted that the dialog with the Council of Ministers of Crimea is advancing successfully. “We’ve had a rather good dialog with the Government. This is a two-way traffic road and we have developed a good understanding,” said the entrepreneur.

Mr. Firtash has been actively advocating an idea of promoting the practice of cities principal employers’ helping communities they operate in.

The Crimean Soda Plant and Krymskiy TITAN both employ over 7 thousand people and cities housing them completely depend on these industries. Tax deductions from Krymskiy TITAN make up more than 50 percent of Armiansk municipal budget.

The corporation has covered the bills of reconstruction of the hospital and the culture club of the city of Armiansk. The total of expenditures for social  programs in 2010 was above 17 million hryvnias. In 2011, the company is financing the cost of capital repairs of roads and buildings roofs, and is pursuing a major city lighting infrastructure restoration effort.