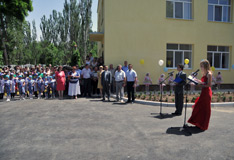 Children and juvenile creativity center and sports school opened after capital reconstruction in Armiansk. The funding to the project was provided by Armiansk’s principal employer – Crimea TITAN. The project has been realized as part of the effort towards the implementation of “Preserve Your City” program initiated by Mr. Dmitry Firtash, Head of the Board of Directors Group DF.

The overall budget of the project amounted ca. 12.5 million UAH. In particular, for funds of Crimea TITAN children center’s walls were insulated, windows were replaced, and new furniture was bought. In the sports school the dining room, driveway and sidewalk next to the building, and facade were renovated. Before the end of autumn renovation of the gym and pool at the sports school will be completed. For these purposes, the company plans to invest more than 3.5 million UAH.

Almost all the companies Mr. Firtash invests in are cities’ principal employers or generate lion’s shares of municipal budgets in cities and towns they are based in. Such municipalities include Cherkassy and Rivne, Gorlovka (Donetsk region), Severodonetsk (Lugansk region), Irshansk (Zhytomir region), Vilnohirsk (Dnipropetrovsk region), Armiansk and Krasnoperekopslk (both in Crimea).

Upon Dmitry Firtash’s initiative, companies in these cities are active in social projects run by municipalities or move forward their own initiatives of support to citizens.

To find out more about social responsibility of the Firtash Group of companies Group DF, please, visit “Preserve Your City”  and Facebook pages.