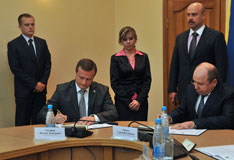 A Cooperation Agreement whereby Azot will carry out capital refurbishment of roads, the city’s culture club and a square with a fountain in front of it, as well as build children’s playgrounds and sport grounds, was signed in Cherkassy. The signatories to the Agreement were Mr. V. Skliarov, Chairman of the Board of Azot, Mr. Sergey Odarych, Mayor f Cherkassy, and Mr. Sergey Riabtsev, First Vice-Chairman of Cherkassy regional State Admisnitration.

Commenting on the Agreement signature, Mr. Skliarov stressed that the support to the city is being provided on the initiative of the company’s owner – Mr. Dmitry Firtash. “This assistance is part of Dmitry Firtash’s initiative pursued towards the possibly widest spread of the practice when cities’ principal employers render support to communities they are based in. Azot is the largest tax payer in Cherkassy region and our company stands ready to do more for the city,” said Vitaliy Skliarov.

The enterprise has committed to invest about 30 million hryvnias in the culture club reconstruction and in repairs of the square and fountain in front of it. Over the period from 2012 till 2015, 16 playgrounds and sport grounds will be built. The repaired roads and sidewalks of several streets will become yet another pleasant surprise donation for Cherkassy citizens.

Cherkassy Mayor Sergey Odarych pointed out the importance of the assistance provided by Azot. “I believe that the day when we reached a principal agreement on cooperation will be enshrined in Cherkassy history as it signifies the end of living-on-my-own era for the company and for the city,@ said Mr. Odarych.

The Agreement of Azot’s participation in the local social infrastructure development has become another example of Mr. Firtash’s enterprises’ corporate social responsibility policy: at an earlier time, Azot claimed its intention to financially support a boarding school in the town of Smila and to acquire medical equipment for the pediatric ward of the local cancer center.

“Support to Communities” is an initiative of Dmitry Firtash, Head of the Board of Directors of Group DF and Head of the Joint Employers Movement of Ukraine. He has been a long-time proponent of the practice of principal employers’ support to communities housing them. This policy has been consistently pursued by all companies owned by Mr. Firtash in Ukraine: in Cherkassy, in Rivne, in Gorlovka (Donetsk region), in Severodinetsk (Lugansk region) and in the Crimean Autonomy (cities of Armiansk and Krasnoperekopsk).