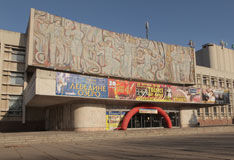 A major reconstruction effort is underway at Cherkassy-based People’s Friendship Culture Club owned by Cherkassy AZOT plant. Renovation works are being carried out at the club’s roofing and two ballrooms, windows are being replaced with new ones. Furthermore, before the end of year, the project provides for the capital refurbishment of five halls for children’s dance bands’ practicing which, among other things, will include special dancing flooring.

“The works volumes are enormous. The Club will essentially be reconstructed completely,” commented Ms. Galina Burlaka, AZOT’s HR Deputy Director. “The foyer and lobby area, as well as the cloakroom will be renovated, but most importantly – the spectators hall will be redecorated with new design and lighting coming up. The stage will be fully redesigned which will include new veils and curtains, state-of-the-art light-and-sound equipment allowing us to host the top-level performers. Communications will also be replaced and an autonomous heating unit will be installed. According to the schedule, by the Day of the City celebrated in June, the club’s façade will have been remodeled, the square and fountain in front of the club will have been renovated. The internal finishing works are expected to be completed in the fall.”

The club’s management assures that the renovated People’s Friendship will become a genuine jewel in the city’s architectural crown, while the square in front of the club will be a favorite leisure venue for Cherkassy citizens.

AZOT has been improving the municipal social infrastructure following the signature of a cooperation agreement with Cherkassy city hall and Cherkassy regional administration. The initiative of support to the city was moved forward by the company’s owner, Mr. Dmitry Firtash, Head of the Board of Directors Group DF and Head of the Joint Employers Movement of Ukraine.

“Preserve Your City” is his nationwide initiative. Mr. Firtash has been a long-time proponent of the practice of principal employers’ support to communities hosting them. This policy has been consistently pursued by all companies owned by Mr. Firtash in Ukraine: in Cherkassy, in Rivne, in Gorlovka (Donetsk region), in Severodinetsk (Lugansk region) and in the Crimean Autonomy (cities of Armiansk and Krasnoperekopsk).