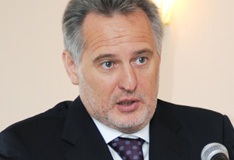 According to Mr. Firtash, the role of mineral fertilizers producers is extremely important globally: the planet’s population, having doubled over the past 40 years, continues to grow. In the future, the food production will have to be increased by 70 percent and this objective may only be achieved with reliance on chemical industry. “The sector faces a great future and the chemical business is one of the most lucrative investment targets,” commented Head of the Board of Directors of Group DF.

He also pointed out that the President of Ukraine referred to the agriculture as to one of the key national priorities. “Perfectly clear messages were sent to nitrogen chemicals producers in the first instance. The agriculture can’t do without us. No fertilizers, no agriculture,” summarized Mr. Firtash. 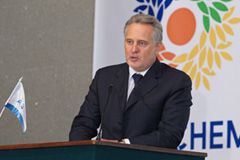 Dmitry Firtash noted that UAH 264 million would be spent on implementation of investment projects, UAH 669.6 million on capital repairs, and UAH 541.6 million on modernization/ In 2013, OSTCHEM holding will invest UAH 1.5 billion in its nitrogen...

Systemic development of chemical education is a must for Ukraine, stated Mr. Dmitry Firtash speaking at the Congress of the Union of Chemists of Ukraine. “We have to support universities and see to it that they train specialists possessing...

While addressing the Congress of Chemists of Ukraine, Mr. Dmitry Firtash stressed that Ukraine’s chemical sector consolidation is the only prerequisite for being strongly competitive globally. “We have to consolidate enterprises in...

Ukrainian chemical sector has to devise a pattern of joint sales, to come to terms with international mineral fertilizers producers, said Mr. Dmitry Firtash as he was speaking 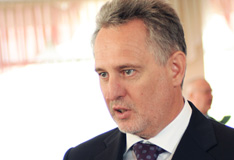 Dmitry Firtash: "We Have to Engage Science in new Technologies Development"

Speaking at the Congress of Chemists of Ukraine, Dmitry Firtash said he was certain that the advanced processing development is a key to future success of Ukrainian chemical industr

“We agreed with the Government to grant a 20 % discount to agricultural producers and we have lived up to this commitment in full having shipped 650 thousand tons of ammonia nitrate and 250 tons of urea,” said Mr. Firtash