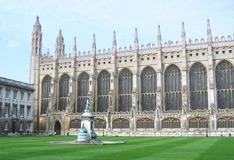 Over the incomplete 4 years of its existence, the Cambridge Ukrainian Studies Program has defined the scholarly specialization of several dozen students of the world’s most prestigious university. Increasingly more young people in Western countries discover the country which – however ironic it may sound given its size and role in the European civilization – remains terra incognita for the majority of English people. Breaking stereotypes and refuting myths rooted in Europeans’ minds in relation to the continent’s largest state is the key objective of the Program, according to its Director, Prof. Rory Finnin. “The Cambridge Ukrainian Studies works actively to change this rather amusing reality, to prepare a new generation of British leaders, of Europeans leaders who know Ukraine quite well,” says the Professor. Thus, promoting knowledge about Ukraine is no less important a component than studying this country’s rich historic and cultural heritage. This effort involves the world’s leading Ukraine researchers from many countries and quite frequently the auditoriums where lectures and seminars are hosted by such eminent scholars as Frank Sysyn of the University of Alberta, Timothy Snyder of Yale University or George Grabovicz of Harvard University cannot seat all those willing to attend.

The students particularly excelling in their studies are offered an opportunity to enrich their knowledge and skills in Ukraine. To this end, the University has instituted several grants awarded on a competitive basis and allowing young people to spend some time in the country they learn. Lviv-based Ukrainian Catholic University that has been the Cambridge Ukrainian Studies’ partner for quite a while acts as a ground for such placement. At the moment, the faculty are finalizing their decision so that the successful grants winners could arrive in Ukraine as soon as in April. The students that had had their placements in Lviv before find this curriculum component extremely useful and important. “My time in Ukraine was incredibly valuable in many senses and did not only back up the cultural knowledge needed for Paper Uk1. Talking to people personally helped me to understand the inequalities of European immigration legislation, which is biased against Ukraine; socio-linguistic issues; and the way politics impacts on everyday business decisions,” commented one of the previous years’ grantees.