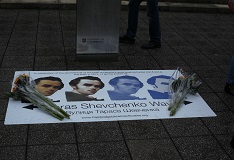 “Taras Shevchenko is one of the most uncompromising and unique voices in modern European culture and this voice is becoming increasingly better known in Great Britain”, written on the official website of the Cambridge University.

Today, the University is announcing that it has named a central avenue on the Sidgwick Site ‘Taras Shevchenko Way’. Today’s unveiling is connected with this week’s Days of Ukraine festival in London (17-19 October), which is showcasing the best of contemporary Ukraine’s literature, music, fashion, and visual art.

Its location -  at the intersection of the Faculties of Law, History, Divinity and Modern and Medieval Languages - was selected to speak to the poet’s enduring legacy.

H.E. Ambassador of Ukraine to the United Kingdom of Great Britain and Northern Ireland Volodymyr Khandogiy is sure that today’s unveiling of the avenue named after Ukrainian poet is one more step bringing Ukraine, with its rich history and culture, closer to Europe.

“Naming the avenue after Taras Shevchenko and unveiling of a special commemorative pavement marker is the first and symbolic step made in the framework of unprecedented festival “Days of Ukraine in the UK” organized by FIRTASH Foundation. This is a significant step in the world recognition of Ukraine”, said Volodymyr Khandogiy.

Over the course of the coming year, the University of Cambridge will be joining the world in celebrating the 200th anniversary of Shevchenko’s birth.

At the same time the FIRTASH Foundation Chairperson and cofounder Lada Firtash stressed that cultural connections could strength cooperation between countries, unite peoples and make them strategic partners.

“Emergence of Taras Shevchenko Way in Cambridge is a result of cultural and educational programme established few years ago in the UK”, - said Lada Firtash, the Chairperson of  FIRTASH Foundation and the Days of Ukraine in the UK.

Since 2008, Taras Shevchenko’s poetry has been studied in the Ukrainian original by Cambridge students in the MML Faculty. Since 2011, prints of his paintings have hung in seminar rooms in the Raised Faculty Building. Cambridge Ukrainian Studies, a programme of the Department of Slavonic Studies, was launched in 2008 with the generous financial support of Dmitry and Lada Firtash’s FIRTASH Foundation, which is also underwriting the Days of Ukraine initiative.

Cambridge Ukrainian Studies has worked to deepen public understanding of Ukraine and to advance fresh, innovative approaches to research on the country, which is a critical crossroads between 'East' and 'West' with a rich historical, linguistic, and cultural inheritance.

“The Days of Ukraine in the UK” is a Ukrainian cultural festival held on 17-19 October 2013 in London. Over the three days, Londoners and visitors to the British capital will be treated to the best of Ukraine’s rich and diverse cultural heritage and contemporary arts. The Days of Ukraine will culminate in a festive fair of Ukrainian folk crafts, as well as a gala concert featuring prominent Ukrainian musicians. Initiated and organised by FIRTASH Foundation, this project runs with financial support from Group DF, an international group of companies.

FIRTASH Foundation is a private charity founded by Dmitry and Lada Firtash. The Foundation’s primary objective is long-term and systematic support of education and culture in Ukraine, as well as development of creative and intellectual capacity of the Ukrainian youth. Priority areas of the fund: support talented, goal-oriented Ukrainian youth who lead active lifestyles; promote the study of the Ukrainian language, history and culture in Western Europe; support Ukrainian culture, including the preservation and renewal of Ukraine’s national, cultural and spiritual heritage. Educational projects of the fund: the Ukrainian Scholarship programme provides Ukrainian youth with full scholarships to one of the best universities in the world; the Ukrainian Studies programme at the University of Cambridge offers foreign students the chance to study Ukrainian language, history, culture, literature and cinematography at the University of Cambridge.

Group DF is a diversified international group of companies, operating in a number of countries across Europe and Asia. Our core areas of operations are fertilizer and titanium businesses, gas distribution and banking. Other businesses of the Group currently include agribusiness, media business, soda ash production, energy infrastructure development and real estate. Group DF is actively developing its investment portfolio and expanding into new business segments. Currently, the Group is one of the leading chemical industry investors in Eastern Europe. The founder of Group DF is Dmitry Firtash, a prominent Ukrainian investor and businessman.