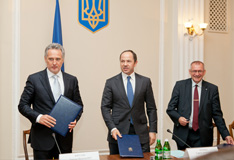 1 June 2012 Federation of Employers of Ukraine

Employment in Ukraine must be raised through the advancement of industry, small and medium business, said Dmitry Firtash, President of the Federation of Employers of Ukraine following the signature of the National Trilateral Agreement On Employment and Jobs for 2012 – 2017. Two other signatories to the Agreement are Sergey Tigipko, Vice-Prime Minister of Ukraine, Minister of Social Policy; and Yuriy Kulyk, President of the Federation of Trade Unions of Ukraine.

“The growth in real production is a driver for the growth in employment. It requires quality transformations in the Ukrainian economy which includes the financial system reformation, investment climate improvement, innovations implementation, etc. The signed Agreement is an attempt to get back to real economy where employment and production growth rather than pumping virtual money into the economy are at the forefront,” commented Mr. Firtash.

“To achieve real economic development, we have to achieve rise in employment. New enterprises are a must, for it is only the new production that will boost the economy and create new jobs. Small and medium business must gain momentum,” said Dmitry Firtash.

According to the FEU President, employment promotion is no longer a merely state policy issue. “It is literally an issue for each businessman and company executive responsible for their employees and securing their well-being.”

Mr. Firtash further remarked that the employment problem is among top priorities across the entire world these days. The global unemployment rate is 6 % now and features a 1 percent per annum growth rate. “This dynamics is only contained owing to vibrantly growing Asian economies where industrial production is on the rise. Against the backdrop of adverse global trends in the international labor market, developing real sectors of the economy is a must for Ukraine, as it is a case in China and India,” claims Mr. Firtash.

The signed National Trilateral Agreement On Employment and Jobs for 2012 – 2017 sets forth 17 strategic objectives focusing on the shared goal of increase in employment.

In particular, the parties to the social dialog – employers, government and unions – have agreed to cooperate towards putting in place necessary preconditions for new jobs creation. These actions, among other things, include the rise in Ukraine’s business competitiveness both domestically and internationally, business regulations liberalization, provision of new tools for crediting the real sector of the economy and business climate improvement.

The parties to the social dialog have also agreed to mobilize their capacities to streamline small and medium business promotion which will also include promotion of farming enterprise and green tourism.

With an eye on maintaining the existing jobs, the parties to the Agreement suggested a system of measures supporting enterprises and their employees. One of these envisions preferential lending to companies to sustain their business and to afford payment of partial employment allowances.

The implementation of the National Trilateral Agreement On Employment and Jobs will make it possible to elevate the rate of employment of Ukraine’s citizens up to 64.3 % vis-à-vis 59.2 % recorded in 2011, while the same figure for able-bodied population will go up from 66.5 to 68.5 %. It is also expected that 23 % of the employed citizens of Ukraine will be able to get trained for occupations meeting with a high demand in the national labor market.